In 2013, feeling creatively stagnant in London, I made a poorly-thought-out plan to go and shoot gang culture in Kingston. Embarking on a three month-journey to New York, Bermuda and Jamaica with my assistant Jay, I arrived on the last leg of my trip feeling fragile and a little hesitant, having left Bermuda with my arm in a sling.

Within fifteen seconds of arriving at our apartment in Kingston – steel-gated, smack bang in the middle of a run-down, busy street in Kencot – a man screeched his motorbike to a halt right in front of us. He introduced himself as Mr Right Now (his real name was Erroll Williams), and we could see that he was gentle, funny and genuinely interested in the new tourists that had landed on his street, Central Road. Telling us that he could “get anyting ya need, Right Here, Right Now,” he walked us down to his street-side shop – a place that would eventually become the epicentre of our experience at ‘Jamaican Corner.’ After selling us a couple of Red Stripes to take the edge off travelling, Right Now – who was always smiling like a Cheshire cat – took us to meet the boys.

It was pitch black by the time we walked on pock-marked terrain in search of weed, with Right Now’s best friend Cloud leading the way. We paid five US dollars that night for a “box a weed” that was enough to last us a week, with a little bit of grabba (raw tobacco leaf) thrown in for good measure. Cloud, who will tell anyone that “mi one true love is marijuana,” walked us back to Right Now’s shop where he started cutting up the bud with a machete on a wooden block. We had a heady first night smoking back in our apartment. As we listened to the rest of the street carrying on over the other side of the gate, the thought of spending the next sixteen days there was thrilling and paralysing. 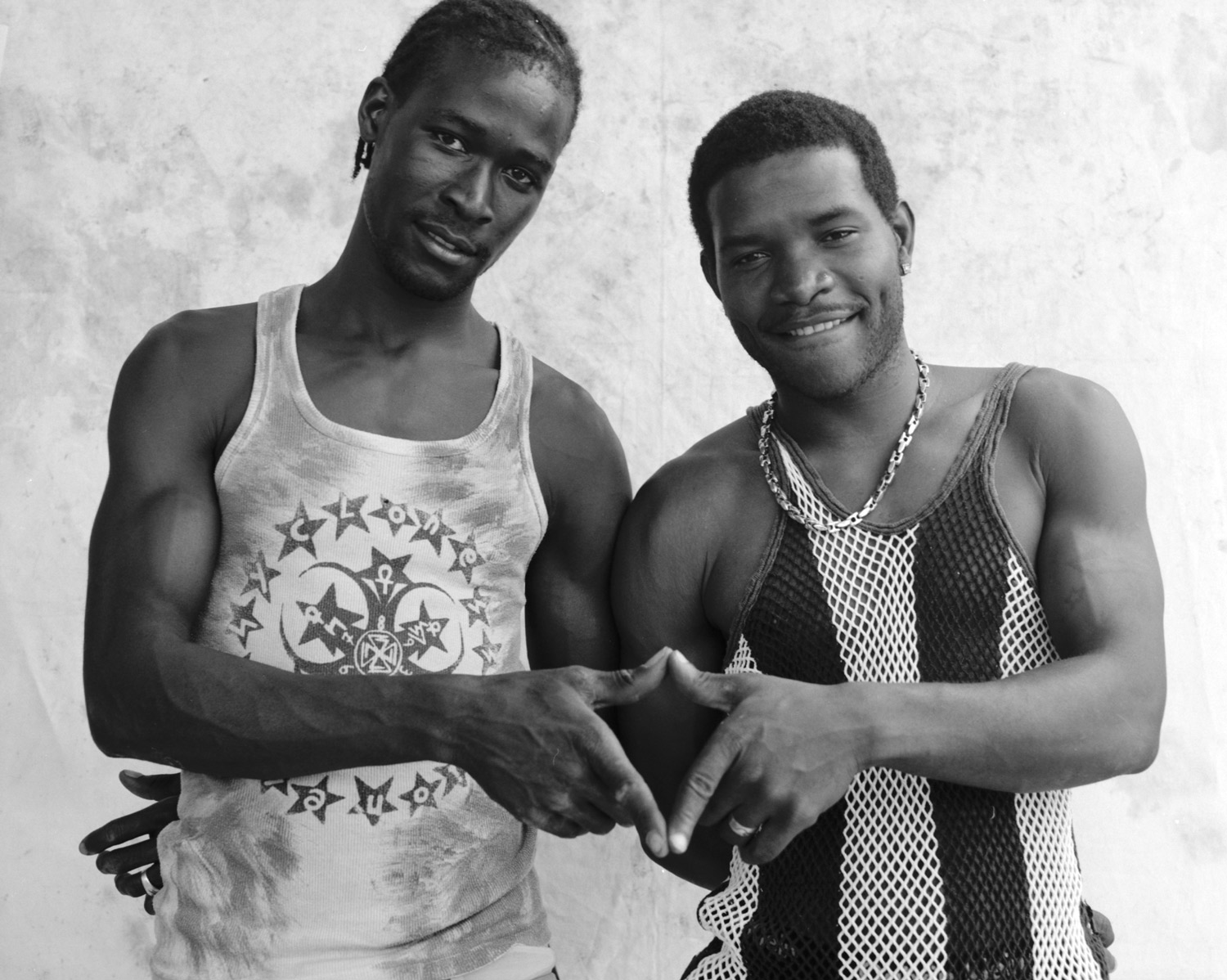 Throughout our stay, the boys did everything and more to make us feel welcome. They rewound the song if they saw us jamming to it and made sure their guests had a chair and a drink at all times. If ever I fell asleep in the yard, my head wouldn’t drop without finding the comfort of Cloud’s shoulder. As I melted in the 40-degree heat, the boys moved my chair through the day to chase the shadows, telling me: “Fluffy, ya skin a burn! Sun is hot like fiyah! Keep cool, Fluffy!” In Kingston, you SWEAT. Suddenly the humble bandana made a lot of sense; the boys all seemed to have one tucked in their pocket or tied round their head, something on hand to mop up their brow. I had gained the nickname Fluffy Diva (I thought it was about my curly hair, but fluffy is an affectionate word for ‘big’) and pretty quickly I vetoed the ‘Diva’ so we all settled on ‘Fluffy Empress,’ a name to which I still answer.

During our time in Kingston, Jay and I bought things from Right Now’s shop or locally at Jamaican Corner. If we were thirsty, we had a ten-cent Bagjuice (a soft plastic triangle full of sweet fruit juice that you bite off at the corner and drink straight from the bag), which Right Now kept cold and slushy in the freezer. Every morning one of the boys gave us a jelly (coconut) to start the day, “fi cleanse the belly!” Right Now’s big brother Dutty, the alpha male of the group, worked at the carwash across the street from the shop and I swear I never saw him leave work except to get a jelly from Right Now. Even in a torrential downpour (during which the boys praised Jah for the rain – a welcome break from the heat) Dutty would still be there, working away.

Dutty working at the carwash in Jamaica Corner

The Jamaican attitude is endlessly positive, everything is always “Up Up Up!” so my self-deprecating humour didn’t really compute with the boys. Charmingly, Right Now took me aside one night and asked, “But why ya be down on yaself, Fluffy?” Our miscommunications over the two weeks, as we spoke a mixture of Patois and broken English, were a constant source of amusement. The boys found my accent and Queen’s English hilarious, and I often had to rearrange their sentences to work out what they were saying. It became even funnier when I went back to visit this year because I was able to understand more than I had before. I spent my days slyly listening to their conversations until the boys clocked on that I was laughing along with their jokes, or that I had turned around to look at them when they were talking about me. Right Now’s eyes would go wide: “Oh God Man! She know wha mi say!”

Yankee, Cloud’s cousin, was the joker of the group. Living between Kingston and New York City, he’d developed a little belly that (along with his lisp) the boys loved to bully him for. He’d smack his tummy in response and tell them they were jealous. 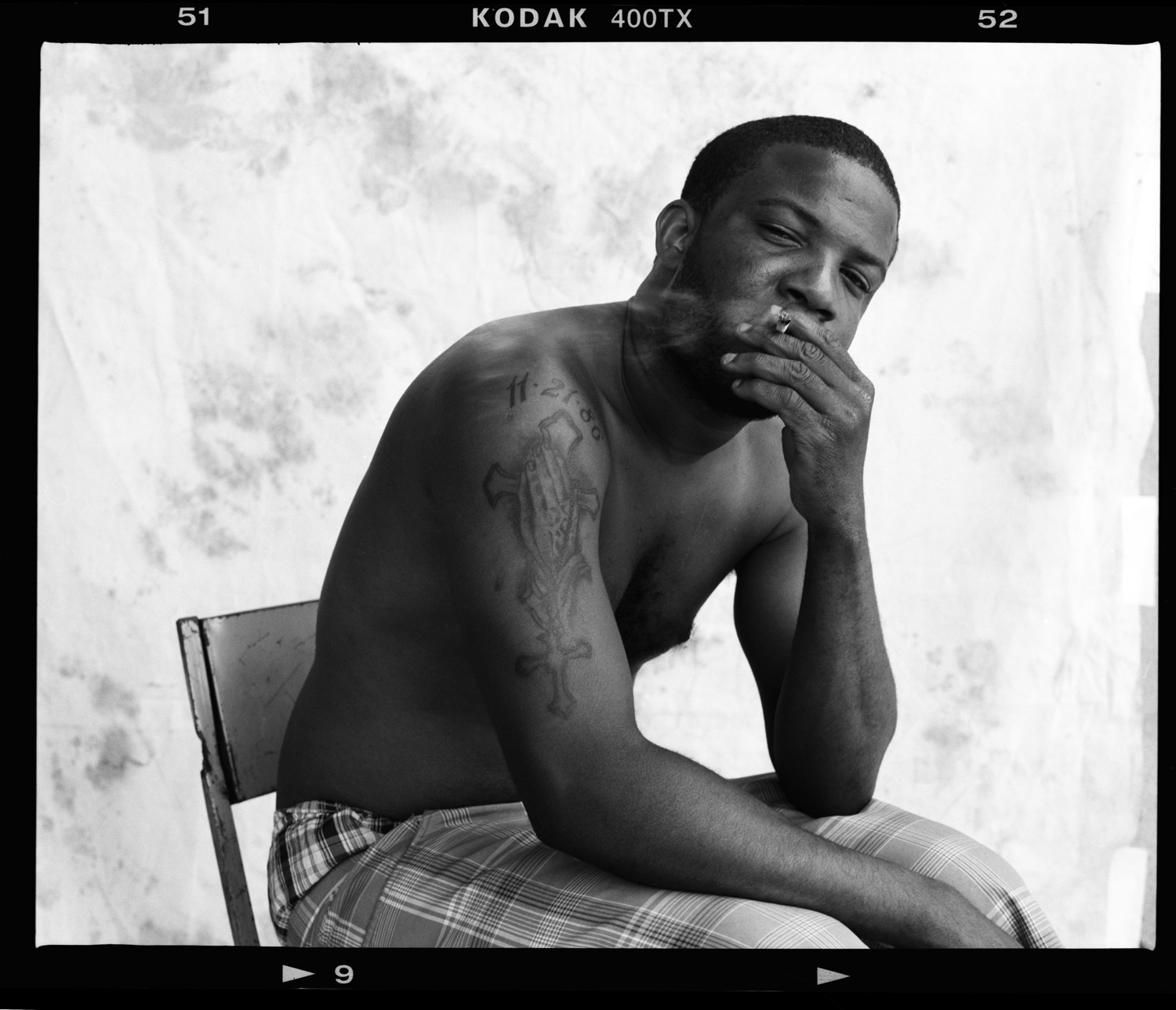 Little Las, who sometimes wore white feathers in his hair, wasn’t much of a talker. As the baby of the group he was more introspective than the others; always present, but a little apart from the group. The boys looked after Little Las the most. It was obvious that he didn’t have the same access to food as everyone else, and I noticed that at every meal one or two of the boys would save something on their plate for him to eat.

I think the only thing that wasn’t shared at Jamaican Corner (including houses; I never quite worked out who lived where) was the weed. At Jamaican Corner, Cloud told us, you roll your own. You might use a little grabba but NEVER tobacco, and never a roach. I tried to share with Cloud one day because I wanted to know what it would be like to smoke a proper Kingston joint, but he told me, “No Fluffy! Mi nah wan fi make you tooo stoned!” Weed was still illegal at that time, so when someone heard a police car was coming, they started a chain of whistling down the street to let people know to hide the weed.

With music blaring at most hours of the day, it feels like everyone in Jamaica is dancing all the time. A few times I caught Sunny or Bembe (the biggest dancers of the group) doing what looked like choreographed dance-offs in front of the shop. Everyone knows the moves to certain songs as if it was on the school curriculum. I went to a dancehall party called Bawsy Tuesdays and watched groups of Japanese dancehall queens doing routines for cameramen with ancient flashbulb video cameras that looked like they belonged in the 50s. Right Now, Cloud and Dutty (all excellent dancers) tried to persuade me to move that night, but my self-conscious London personality got the better of me and I was stiff as a plank. 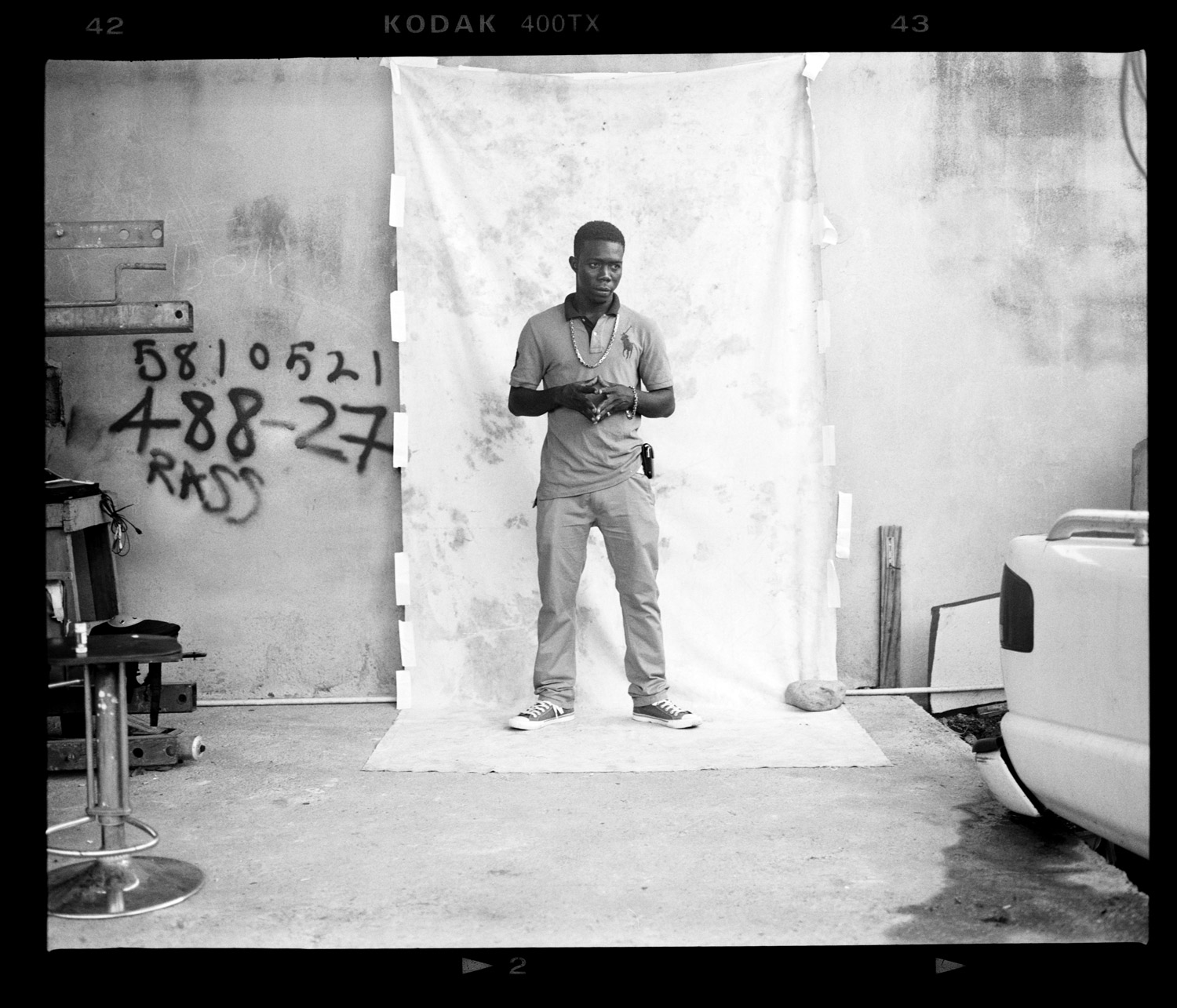 Black Boy, the fashionista of the group, always in freshly-pressed Ralph Lauren Polo tops and brightly-coloured jeans, took me aside that night, played me Celine Dion from his Blackberry and, looking at me from under batted eyelashes, told me it reminded him of me. The closer it got to my leaving, the more the boys upped their flirting games. The Chef introduced me to his children, Castro started talking about what life would be like if he came home with me, someone even told me he loved me. It was one of the sadder things I saw, these island boys wanting so badly to leave with me in the hope of a better life. For the most part, the boys were perfect gentlemen.

Although I did visit downtown Kingston (I had hired a fixer to take me around different areas before even starting my journey), the real focus of my trip became the boys at Jamaican Corner. By spending every day with them – Right Now banging on the gate to wake us up in the morning, Dutty walking me back home at night to make sure I got there safely – I made lifelong friends. When I went back to visit this year, it was as if I had never left. Of course, some things have changed. The carwash sadly had to close down, but Dutty is now a bus conductor, working as hard as ever. Right Now has expanded his shop and tidied out the yard a bit so that his baby mama and kid could move in, and Little Las got really tall (and a bit cheeky too). But equally, some things at Jamaican Corner will always stay the same. Black Boy is still wearing freshly-pressed Ralph Lauren polo shirts. Right Now still gives Bagjuice away to the local kids who can’t afford to buy them. Cloud’s one true love is still marijuana. Sitting down to play dominos with them on the day I left this year, I felt truly grateful to have friends who accepted me so quickly and to this day make an effort to stay in touch. I think Right Now must have called me at least once a week for the last two years. Big Up Yaself, Jamaican Corner!