On the occasion of Remembrance Day, Bego Solís remembers a chance meeting with an American veteran 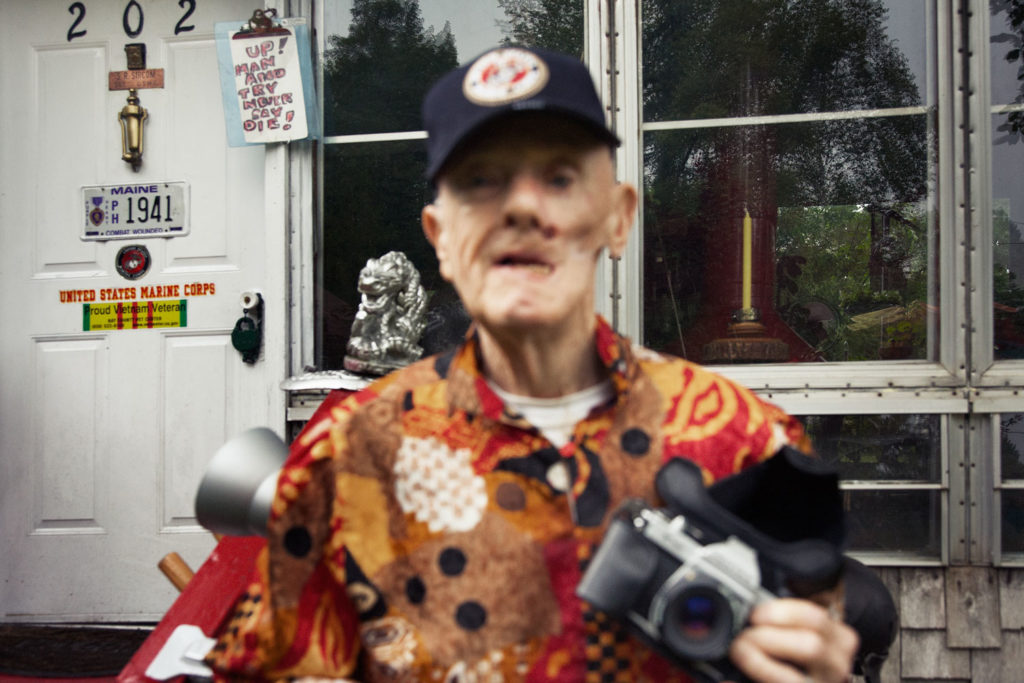 I met Steve in August of 2013. I was in Rockland, for a personal project, taking pictures at the Maine Lobster Festival.

On a Saturday afternoon, after photographing all morning, I decided to go for a walk around the area. I started in the direction of Rockport, a town about two-and-a-half miles away. Somewhere along the way I came across a house surrounded by flags — American flags, POW/MIA flags, flags I didn’t recognise — as well as badges, slogans and statues. There was a sculpture of a dachshund, a pistol hanging from a tree next to a WWII military uniform and several signs displaying the word LOTUS.

I wasn’t clear what it all meant, but I saw a friendly sign outside the house inviting anyone to enter, so I walked up to it. 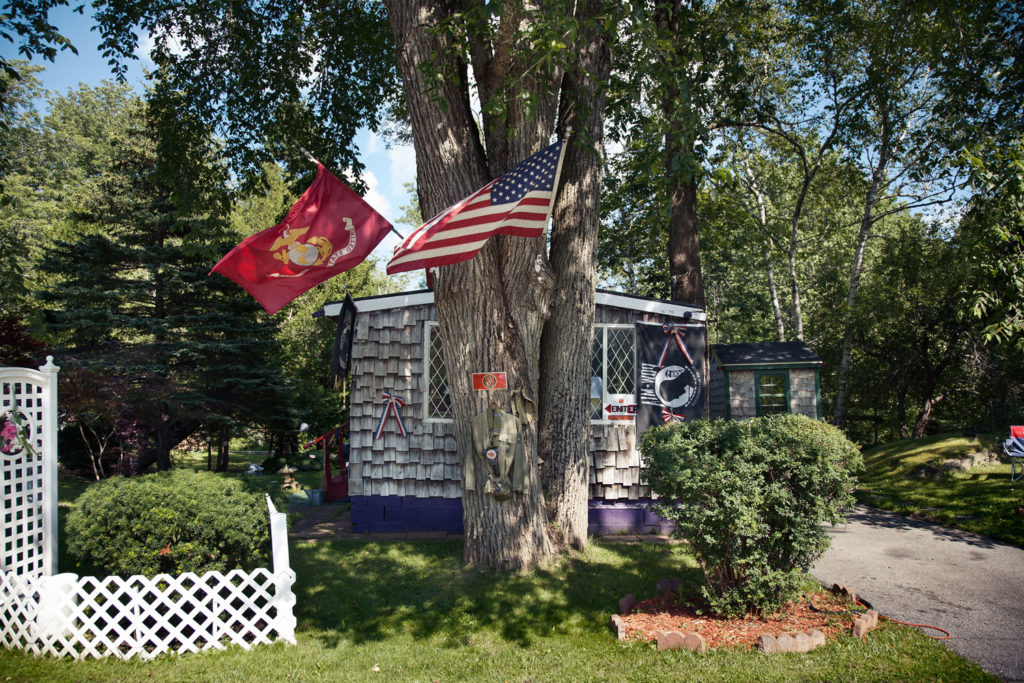 Someone was inside the house, and after seeing me through the window he came out. I greeted him and he went back inside, leaving the door open so I could see he was looking for something. He came out again, this time carrying a camera. He introduced himself — he said his name was Steve Marino — and we started talking.

Steve invited me inside to talk more, but I made my excuses. The truth is I’m usually courageous, but I couldn’t trust a man who had a gun hanging from a tree, gnome statues in his garden and a disfigured face. I told him that I had to go to work, but we made a plan to meet up again the next day after a military parade he was going to attend.

I returned the next day at 4pm, as we had agreed. There was no one at home, just a note on the door saying “Rubby Begonya Radio.” The Mazda that had been parked in his backyard the day before was gone. I assumed he was still at the parade and so I started taking pictures of the garden — a chair, plants, grapefruit pulp everywhere. And all those references to Japan in the shape of plants and trees. Soon enough, Steve came back. 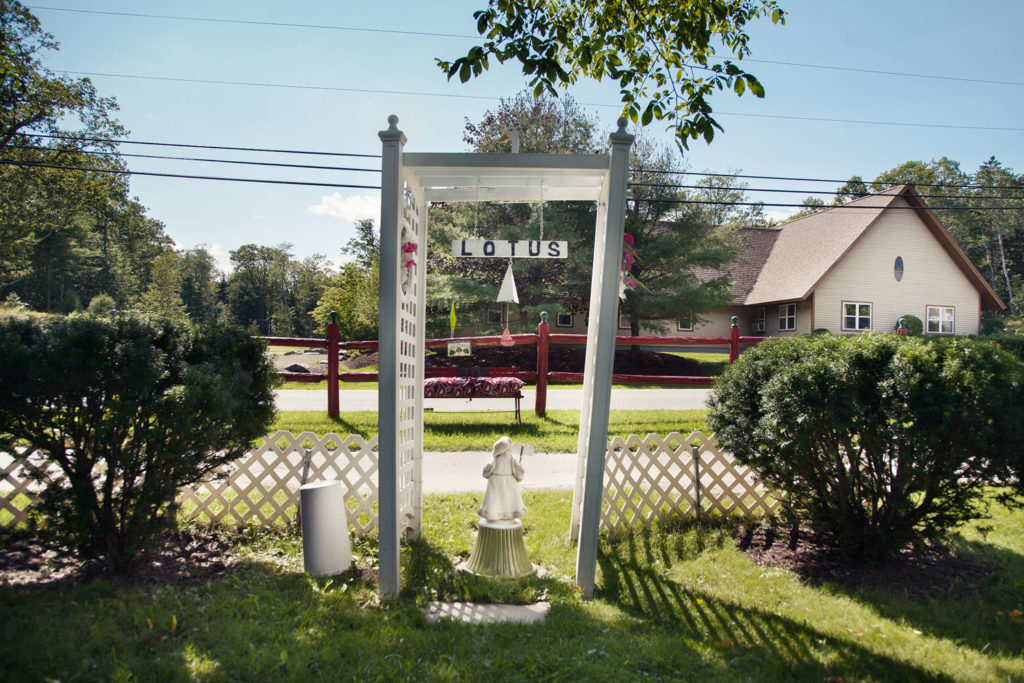 Steve Marino loved plants. He told me that he had planted a lotus near the house and it had taken over the forest behind his garden. I don’t know much about plants, just that lotuses prefer muddy waters — but Steve said it wasn’t easy to do. He was laughing as he spoke about it; seemingly amused by the lotus invasion in the Maine woods.

Steve was missing half of his jaw and there was a hole under his nose. That day he covered it with a band aid. He told me the wounds never healed. He always held a handkerchief in his hand, others hung in the garden and there was a small pile of them in his house, neatly folded and ironed. He explained he needed them to keep himself clean, because the hole in his face kept him constantly drooling.

The house was full of radio sets, and as we moved around he turned them on and cranked up the volume — each one playing songs from the 50s. I followed behind, trying furtively to turn the volume down because it was difficult to hear him, but he kept on raising it. I gave up when I realised that Steve was not deaf, he just didn’t like silence. 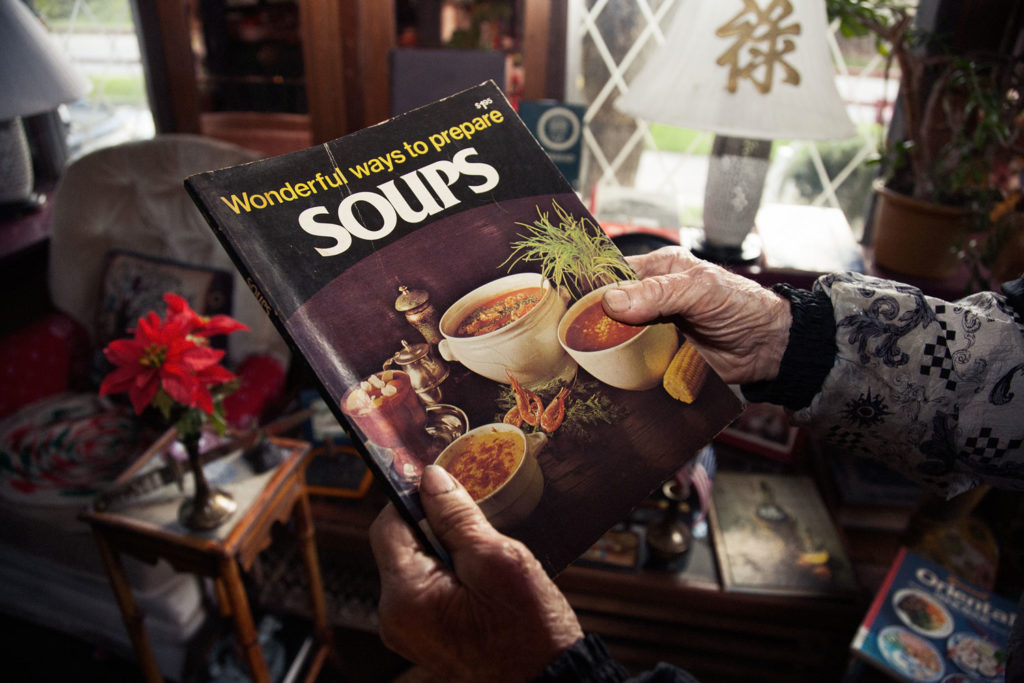 He told me that he was a Marine, and that he had been in World War II, Korea and Vietnam. It was in the latter where he lost a piece of his jaw. He showed me a stone he carried in his purse; I couldn’t quite understand if it was a stone from the beach where he was bombed, from a landing spot or simply a souvenir from some of the places where he had survived.

Steve Marino spoke constantly about fortune. He had many amulets about the house. I asked him how old he was, but he just laughed — he didn’t want to reveal it.

According to Steve, his years in Japan were the happiest in his life. He told me that even though the Americans were the enemies of the Japanese, he was always treated very well. He spoke fondly of the country and described those years as “good times”.

He invited me to come into his room. Next to his bed there was a picture of John F Kennedy and a Kennedy half-dollar struck in 1976 that was attached to a piece of wood — another reference to luck. He took out another Kennedy half-dollar from a closet,  gave it to me and said that I always should keep it so it would bring me luck. 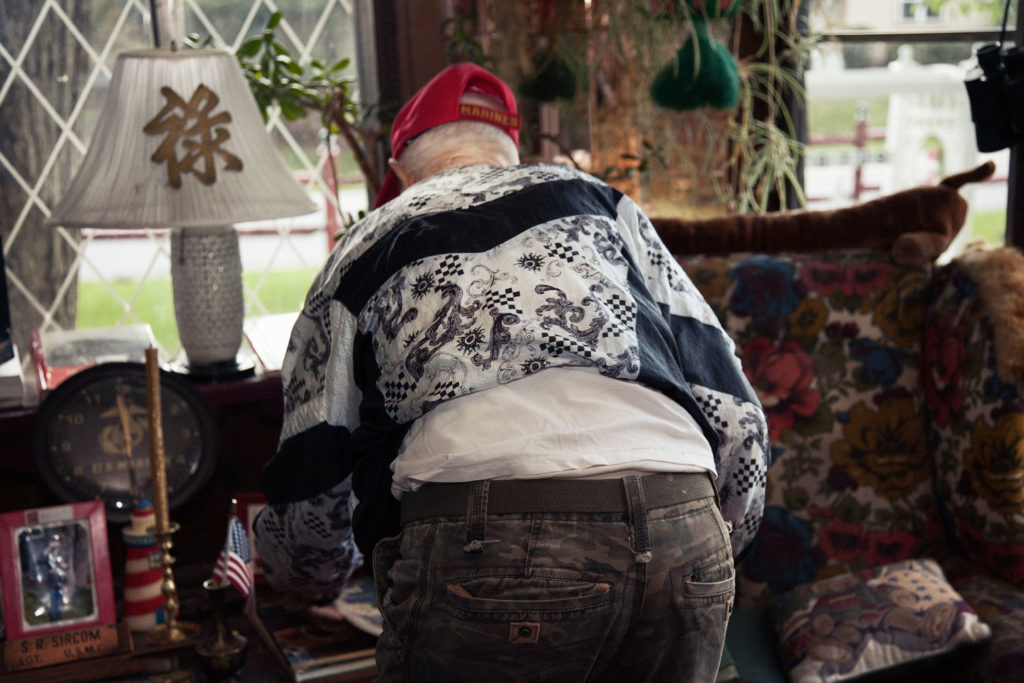 He showed me memories from Japan: several kimonos, his military uniform. It was dark by this point and through the bedroom window I could see that the expansion of lotus was bigger than I thought. On his wall was a collage made up of pictures, clippings and notes. He told me that it was the story of his life, including all the most important moments. He didn’t appear in any of the photographs — it was a collection of scraps, press clippings, book photos and some original pictures of unidentified people.

We went back to the living room and Steve offered me some chocolate and cookies to eat. I wasn’t hungry, but it seemed wrong to refuse his invitation so I told him I liked beer. He got some Budweiser bottles and finally we both relaxed. He served the beer in a German jar as he showed me a collection of candles piled up on top of the fridge. He explained that every night he lit a candle for his mother and another for Buddha; Steve was a Buddhist.

We had a couple of beers in the garden and toasted for life, because “Steve Marino,” he told me (he always spoke about himself in the third person), “was a lucky man.” From time to time he shouted, “Steve Marino go, go, goooo!”

He laughed at my tattoos and showed me one of his, the latters NAM on his arm. He said he had some more, but he couldn’t show them to me. 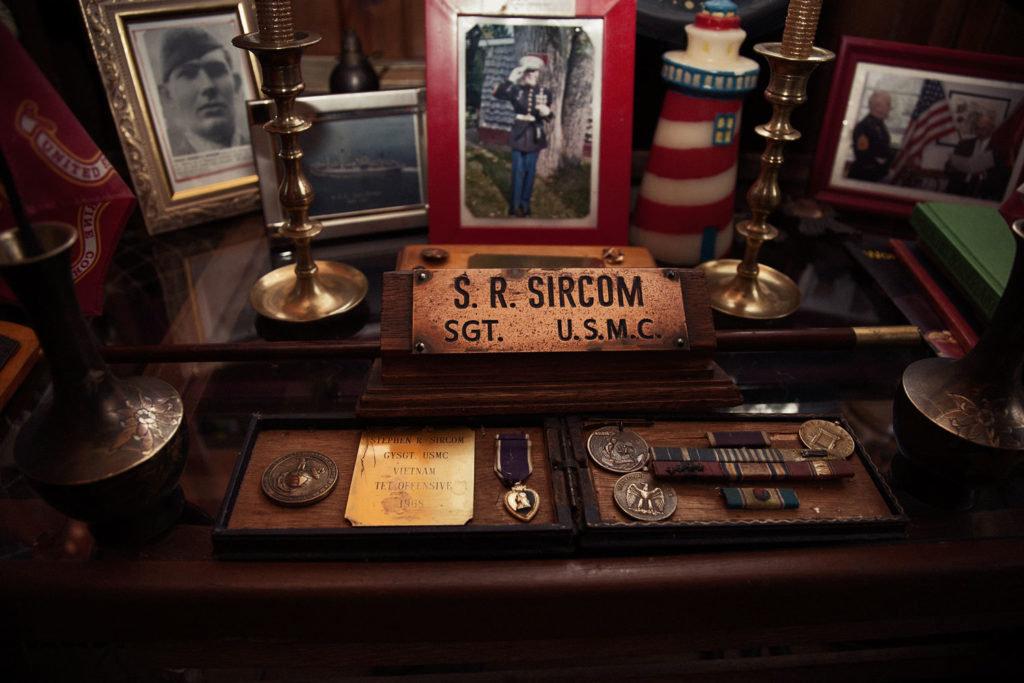 Over a year later, a friend helped me find some details about Steve. We found an online obituary under his real name, Stephen R Sircom, that revealed he was 85 years old and had committed suicide just a month after our meeting.

Stephen was never war wounded, or at least his face wound didn’t occur in any battle. Stephen had already attempted suicide at “a bad time” years ago. A reflex reaction made him turn his face at the very last moment. He had saved his life but his face was disfigured forever after.

Despite having served his country for years, veteran health benefits did not cover facial reconstruction. Psychologically-induced injuries are not considered war injuries. Stephen could not afford to pay for it either.

I’m glad I met Stephen when I did and I will be thinking of him this Remembrance Day. 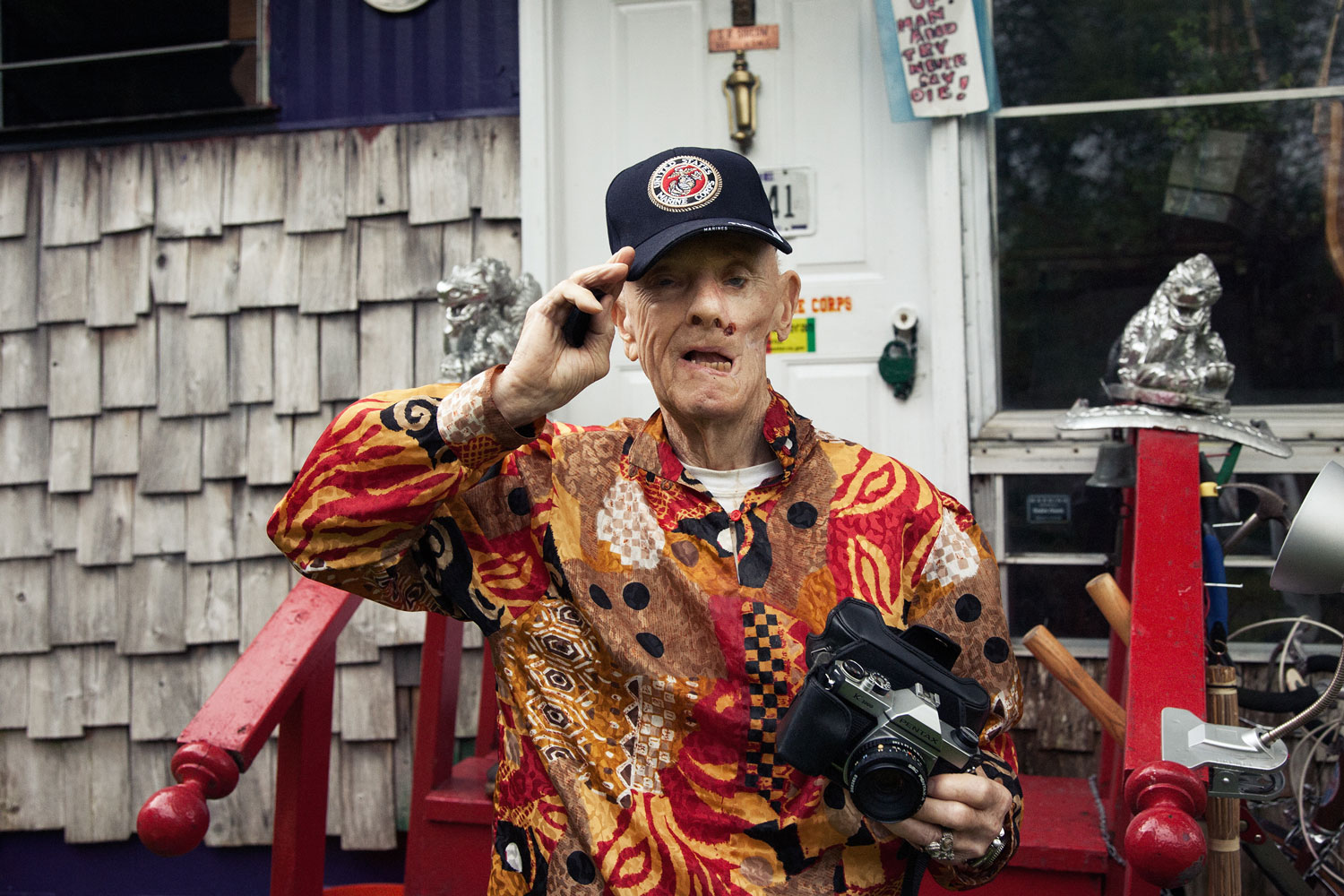