I love to dress like I am coming from somewhere. Flurina Rothenberger tells the stories behind more than a decade’s-worth of photographs from across Africa 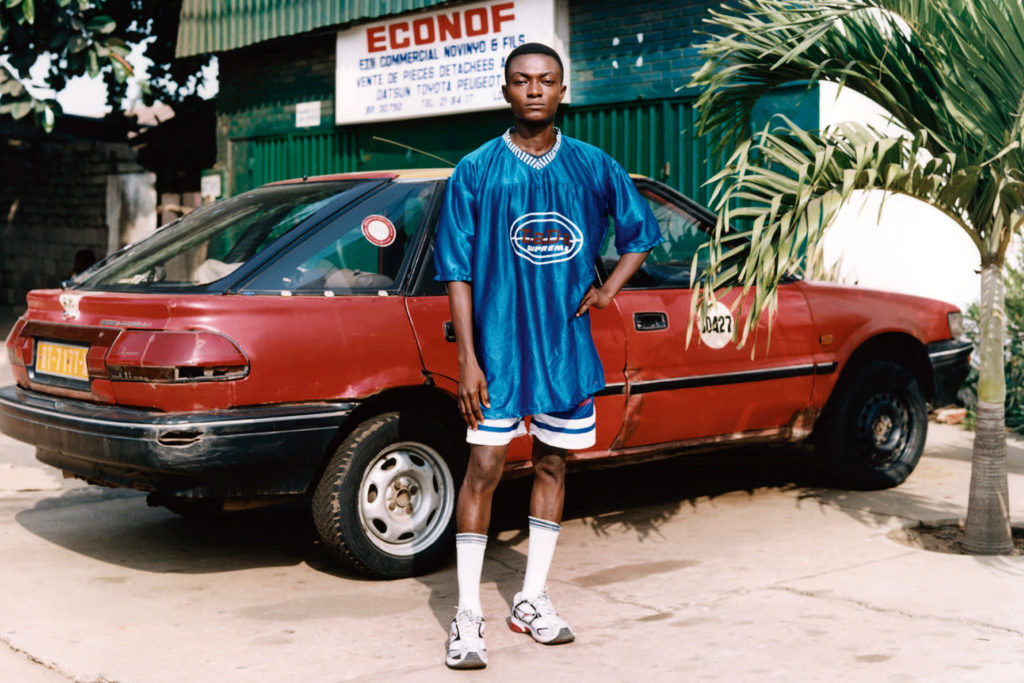 AFRICA — I grew up in Zuénoula, a rural town in the center of Côte d’Ivoire. Since then my memories of this stage in my life have been rounded out by experiences in very different parts of Africa. And yet many of my first adventures remain special and vivid in my mind to this day. I am still reluctant to ride in a four-wheel drive – owing to a heavy dose of nostalgia for the Renault 12 of my childhood: a vehicle bolted together on Ivorian soil with that special extra of an added base plate under the chassis for “challenging” roads.

One day in 1985 we were on our way back home from a visit to the town of Tabou. It was the rainy season and the track had turned into a soft muddy field. We got stuck, the engine of the R12 went dead and my parents exchanged a glance. After we’d spent hours shoving tree branches under the slippery tires, a relaxed, elegant man in a very shiny car drove up and stopped. He made a joke about the poto-poto (a local term for mud) before calling in help on his walkie-talkie. He then got out of the car, skillfully sidestepping the mud to keep his leather loafers clean, and swept my rain-soaked sisters and me into the soft backseat of his vanilla-scented car. The man, who owned a rubber plantation nearby, invited us to stay in his guest apartment on the compound while he had the car fixed. It was the classiest place we had ever been to. We spent the afternoon splashing around in a big blue chlorinated pool, thrilled at this rare opportunity. The next morning we climbed into our now spotless, vacuumed car, scented with a Little Tree air freshener dangling from the rear-view mirror. The cleanliness didn’t last long, though. A few days later, a neighbor delivered her baby on the backseat of the vehicle while being rushed to the clinic. So she named the boy Renault.

This project is a tribute to ordinary life. No spectacular or sensational incidents, just selected daily observations from countries in Africa I have worked or stayed in over the past ten years. These pictures are a modest personal selection of glimpses of Africa that cannot possibly reflect the huge diversity of such a vast continent, comprising 55 independent countries and a correspondingly wide range of peoples, lifestyles and cultures.

Conflicting facts, opportunities, intentions and events often closely co-exist here, stitched together to form a multilayered backdrop to daily life in Africa. Against such a diverse backdrop, the job of keeping the story simple can easily lead to misconceptions. Trying to single out a statement from a place of such contrasting truths is comparable to tackling the traffic in a city like Accra in Ghana or Dar es Salaam in Tanzania. As the situation evolves around you, you’re constantly forced to reconsider your judgment and focus – or else you get stuck and left behind. This is one of the edifying and refreshing challenges I love about working in Africa: it is a strong and constant reminder that a particular image is always an intentional choice of one perspective from among many. The questions this continent raises and casually places in my path make me stop and think about what I actually understand.

I hope Africans living in and outside the continent will recognise fragments of their own past or present reality and tie-ins to their own admiration for the richness that life on this continent has to offer. There is a precious quality we can learn from a majority of Africans: there is always a reason to greet people properly, exchange a few words and thoughts, regardless of how we’re dressed, where we are coming from or headed to. Ultimately, it is a sense of comfort that reawakens the moment I step onto African soil. It is the conviction and peace at heart that things will work out one way or another, either by surprise or as promised. 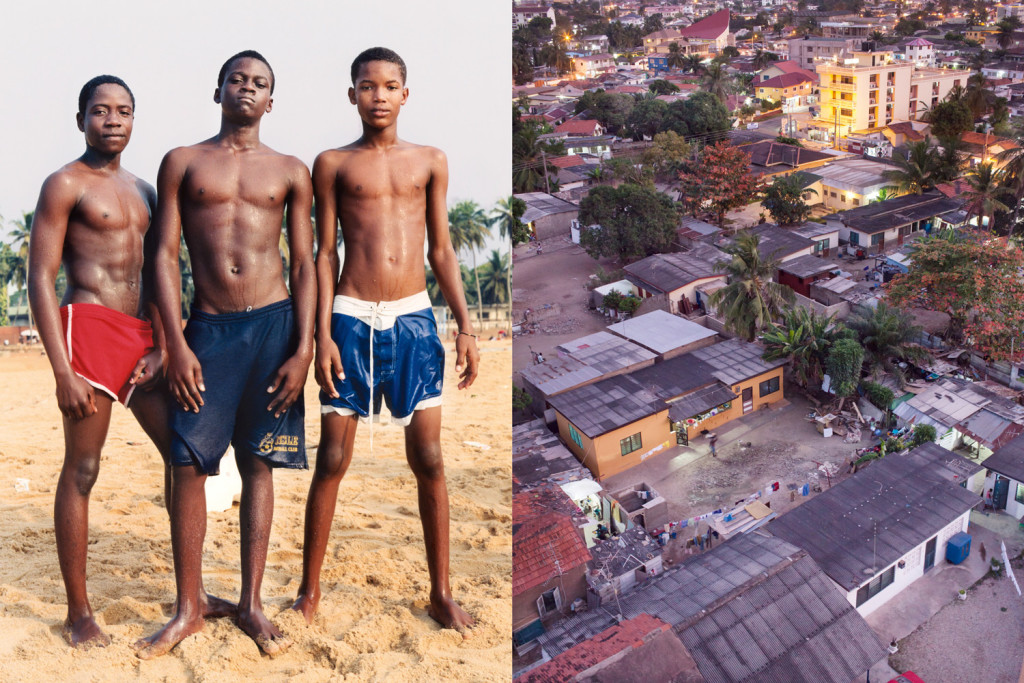 Sundays are a big sporting day in Lomé, the capital of Togo. In the morning, everybody – young and old – head to the beach and spend the day doing gym exercises, drinking coconuts and jumping in the water for a swim. There is a huge culture of keeping fit and this photo shows the pride people take in their bodies. Typically the poorer the place, the more pride people will take in their physical appearance. 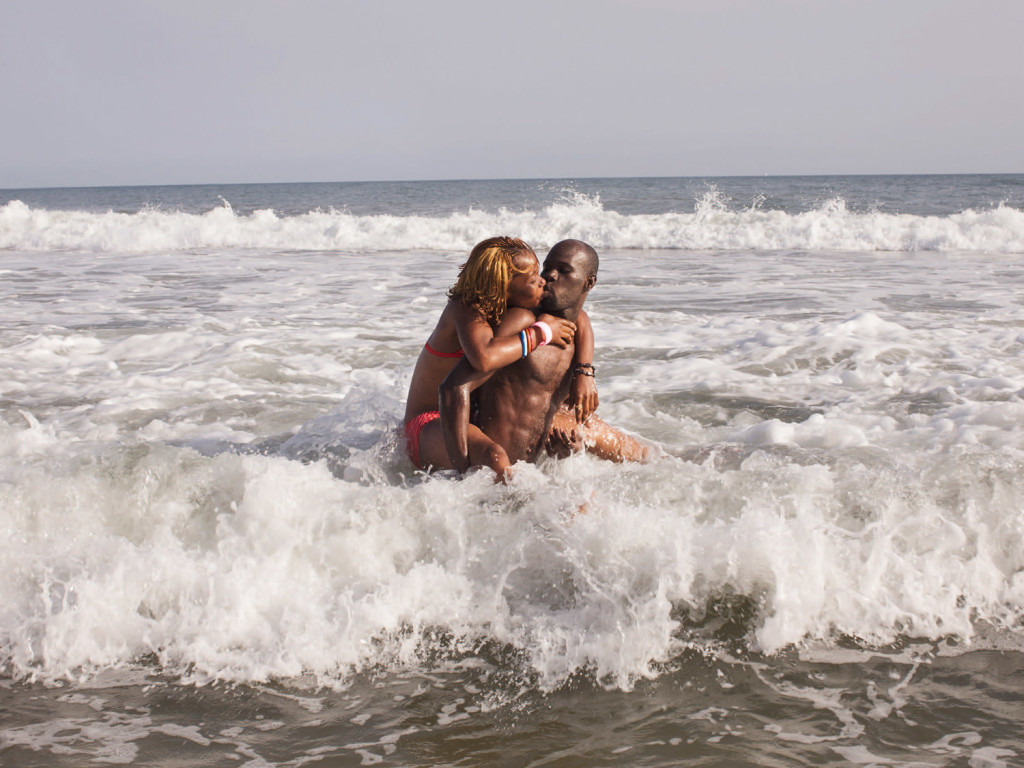 Near African capitals there will be a beach that is cleaner than the others, where everyone will go to swim. When I was growing up, the beach at Grand Bassam used to be populated mainly by old white men with beautiful young Ivorian women. The only young black guys were the ones working at the bars. When I returned in 2008, it was so good to see that things had changed and young couples were making out at the beach. I made a whole series of young couples there. 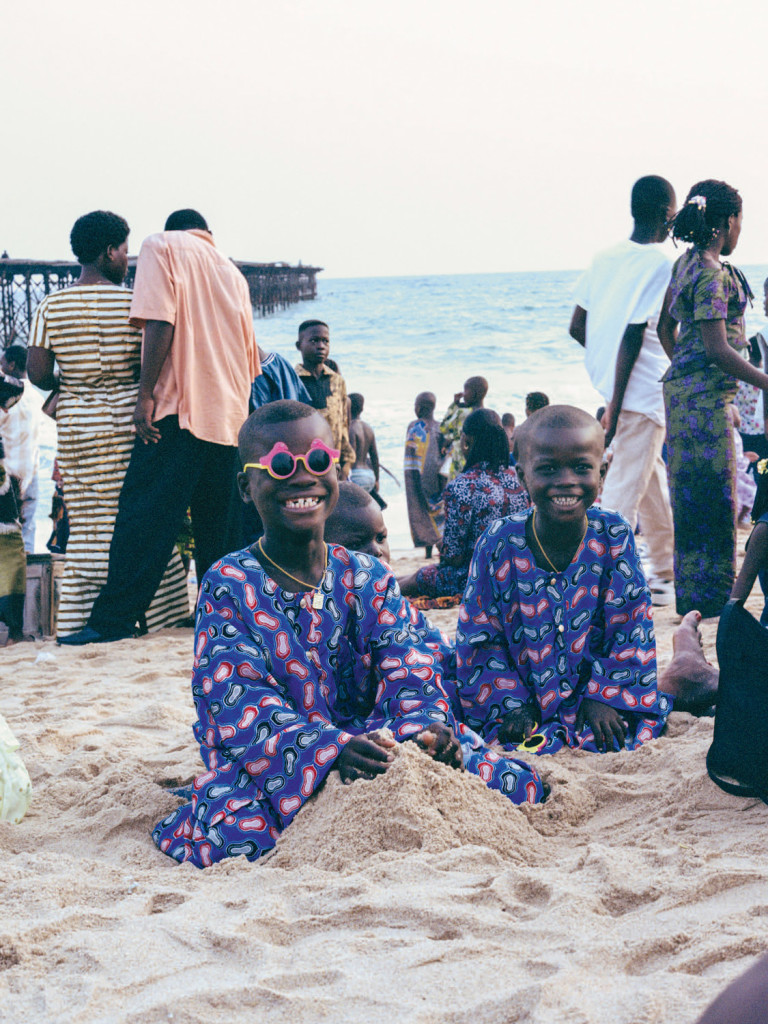 People save up for New Year’s Eve. Tailors will work twenty-four hours a day leading up to it, because everybody spends all their money on custom-made clothes. On New Year’s Day, everyone goes to the beach with picnics and shows off their new outfits. Photographers come around snapping photographs and return an hour later to sell their portraits back to the subjects. 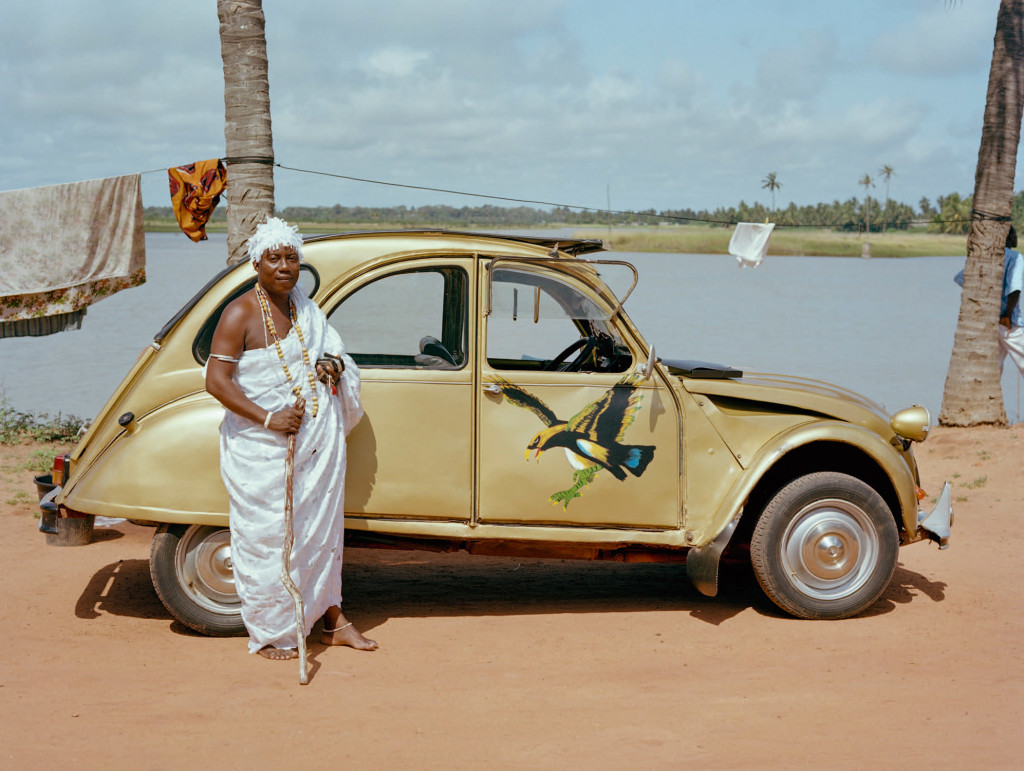 This guy is a Vodoun king from Aneho in Togo. Aneho is one of the West African towns known for being ‘the cradle of Vodoun.’ Vodou is a traditional African belief which now has about 80 million followers, from Brazil to Cuba, New Orleans and Haiti.

Aneho continues to celebrate the tradition of worship in all its royalty, pomp and pageantry. This king is dressed in luxurious white fabric, the colour of Voodoo. He charges members of the community for his healing services, and is holding about five different cell phones to stay in reach. I love the fact that people have no problem sampling different values – you can be globally connected through technology, yet have your feet rooted in African heritage. I assume that’s why so much good music comes from Africa; people know how to sample and they don’t discriminate. 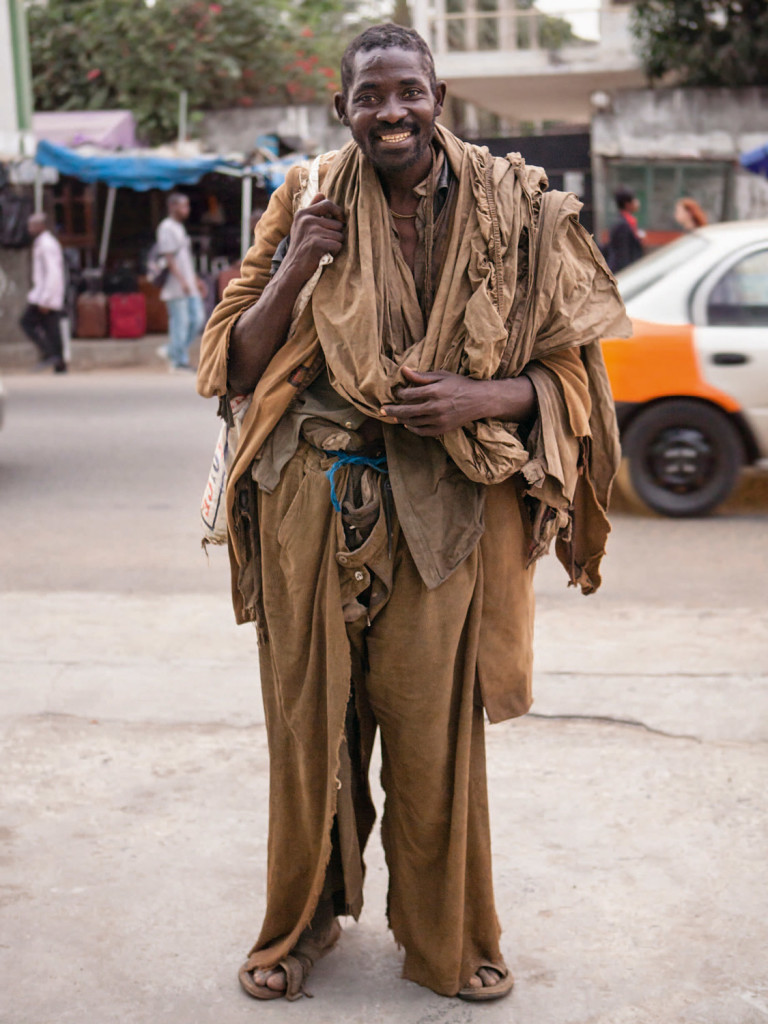 There is a misconception that homeless people are not cared for in their communites, but I don’t think that’s true. These people belong to the city and have their own place in society just like everyone else. This man is known by everyone in town, and they make sure that he doesn’t go hungry. He asked me if I would take his photograph. 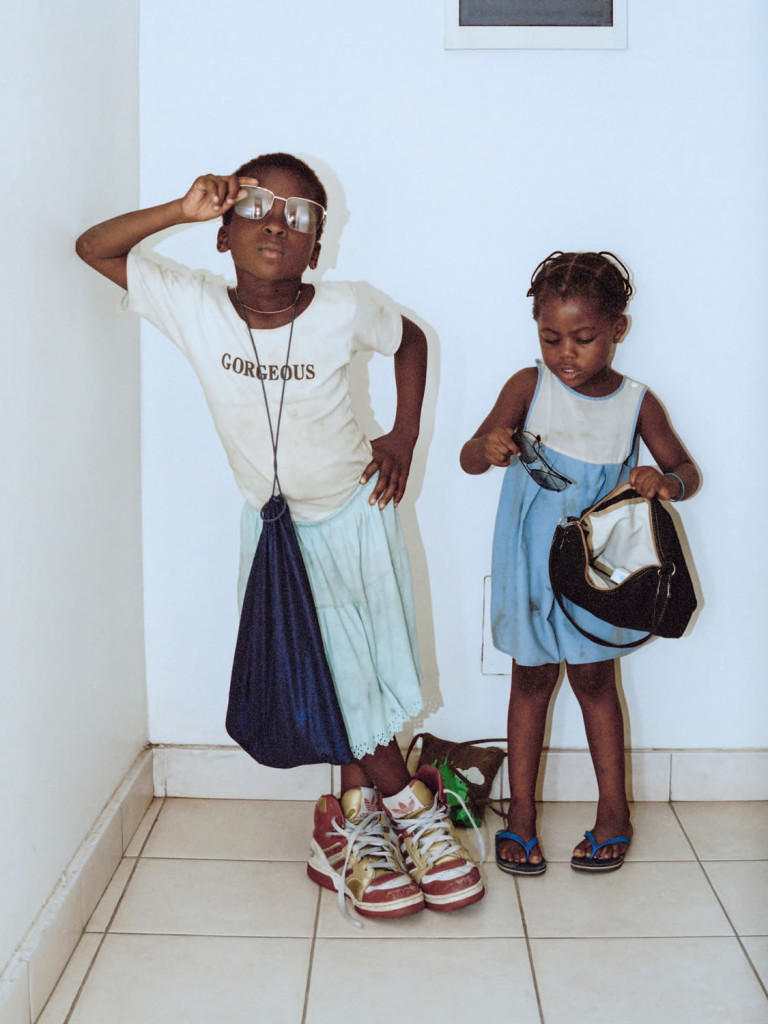 These two girls started dressing up for the picture. They love showing off, and their poses are full of pride and attitude. In Europe we see the body as a vessel for the mind, but in Africa, they think bodies have equal value. Most people feel confident and comfortable in themselves, and they rarely shy away when I ask to take their photo. 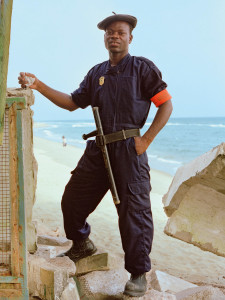 In Ghana, this guard in a clean-cut uniform is patrolling the beach and keeping an eye on the houses. The houses are run down and don’t hold a lot of value but he still patrols the area. It’s another hot day, so he scrunches a tissue in his hand to mop his brow sweat. 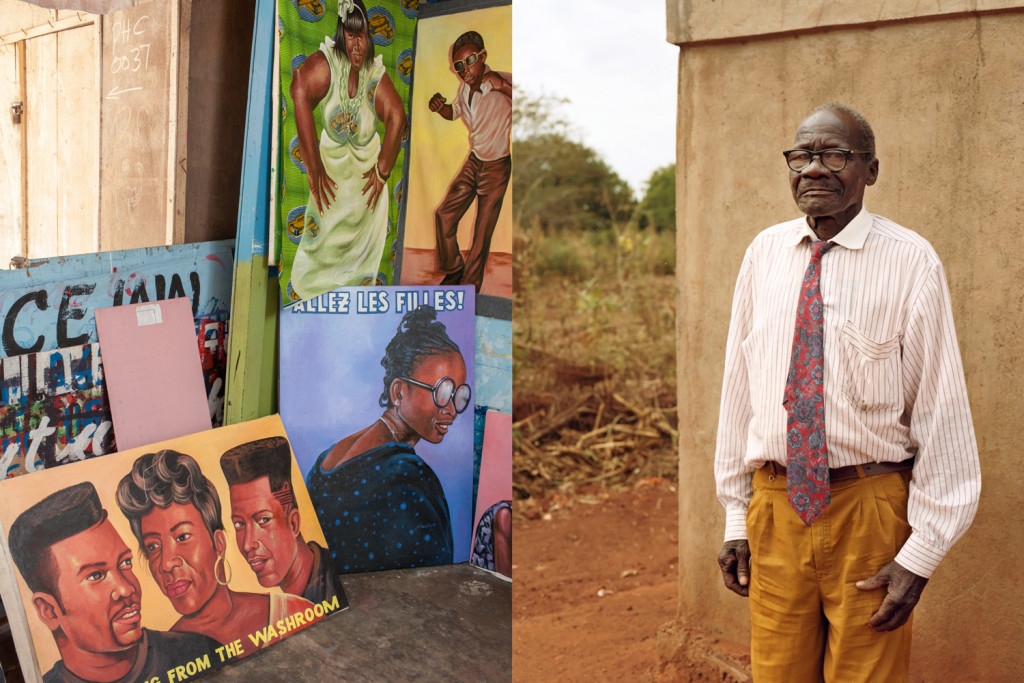 While young people in Africa gesture and pose in photos, older people are normally deadly serious. They take it very seriously and position themselves formally in front of the camera. It says a lot about their relationship with photography, from a time when they were forced to have their pictures taken for passports and documents – photography was a colonial instrument. They see it as impolite to smile or show their teeth. 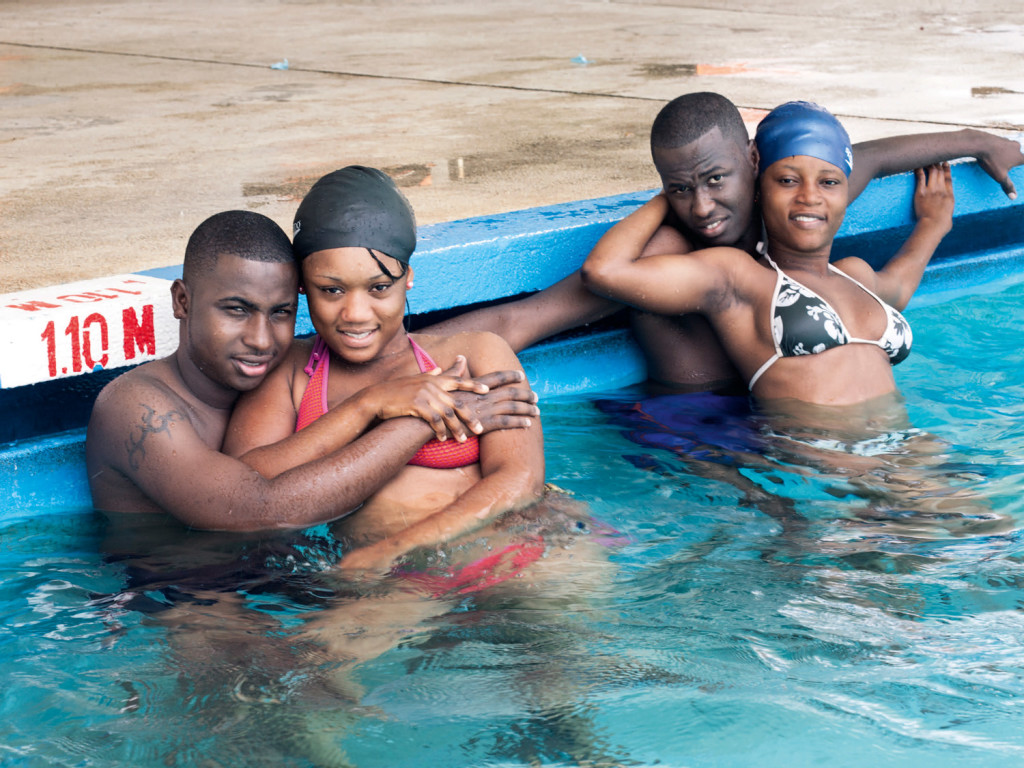 The Abidjan hotel in the Ivory Coast used to be 5-stars when I was growing up, but now this has changed and it is open to the public. These boys were teaching the girls to swim in the pool, but the girls were terrible and weren’t motivated to learn because for them it was more of a date. In Africa, you can’t tell people what to do – if I ask them to pose for a picture they will never do exactly what I say. They always do their own thing and it looks amazing.