Jeffrey Stockbridge shares stories from the road on a 10,000 mile motorcycle tour of the United States, taken in honour of an amazing dad

UNITED STATES — In the summer of 2014 I rode my motorcycle ten thousand miles across the United States and back. I took country roads wherever I could and slept out under the stars. The year before, my dad’s plans of doing the same were cut short. He died of lymphoma on November 11, 2013.

When he first met my mom, my dad loved riding his motorcycle. But after they were married and the kids came along, he was forced to sell it. He finally got himself another bike when I left for college. After I graduated, I got myself one too.

On our first trip together we rode through West Virginia to the Pennsylvania Wilds and up the east coast to the White Mountains of New Hampshire. For the first time in my life, my dad and I became real friends. 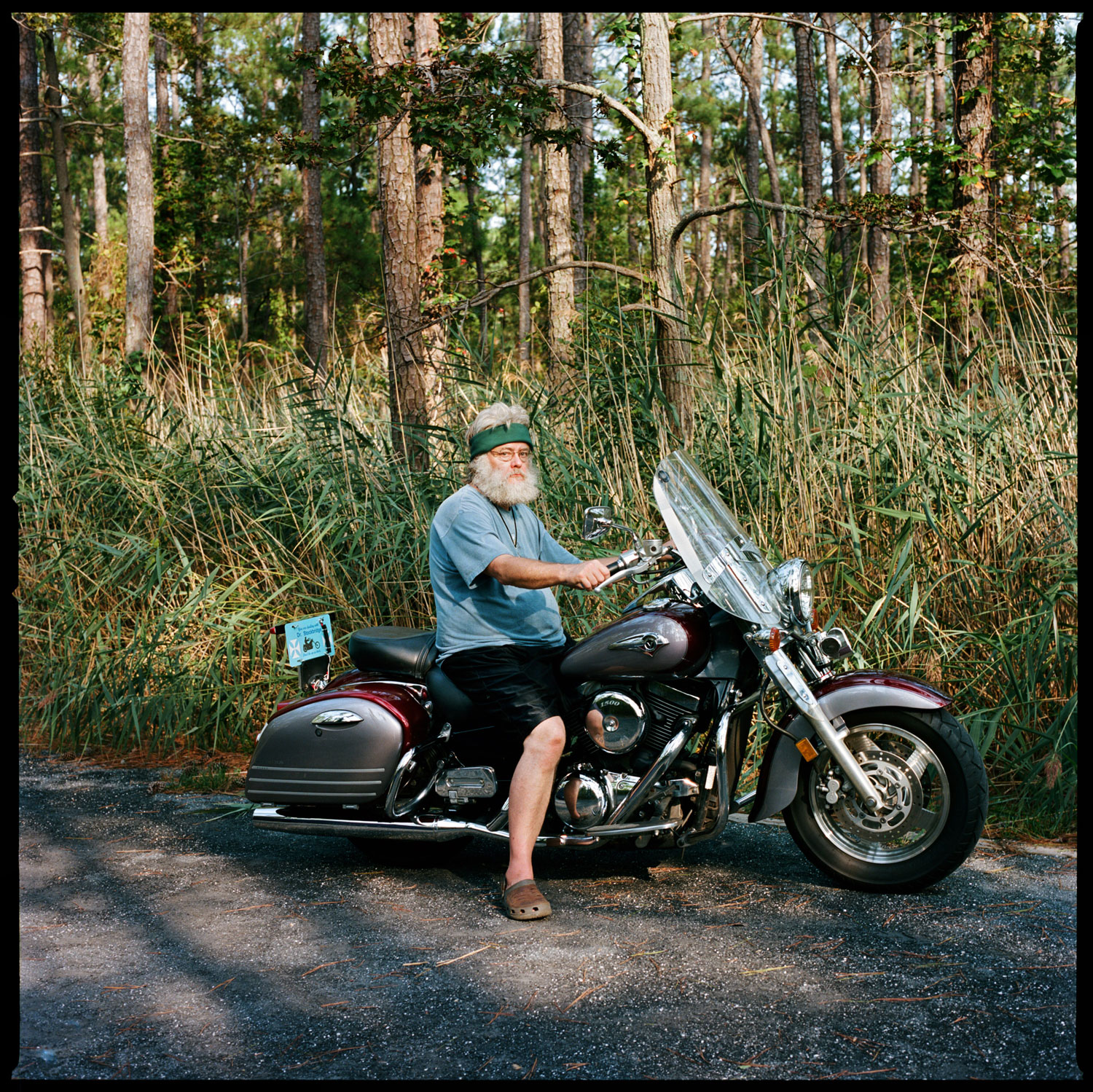 By the campfire at night he confessed all of the things a father might conceal from his son. The truth was that he never wanted to have children. A few years into their marriage, my mother approached him about starting a family and when he protested, she told him that she must have married the wrong man. My dad agreed to have kids to save his marriage. But it wasn’t long after my two sisters and I were born that he realised the mistake he had made; the woman he married was no longer his wife, she was now a mother.

Stories like this poured out of my dad, stories which ran through my head as I rode my motorcycle across the US. My dad had regrets when he died. He complained that he had spent his whole damn life in Woodbine, Maryland. He was upset that he hadn’t travelled much. And although he was trying to make up for it in the final two years of his life, two years wasn’t long enough. 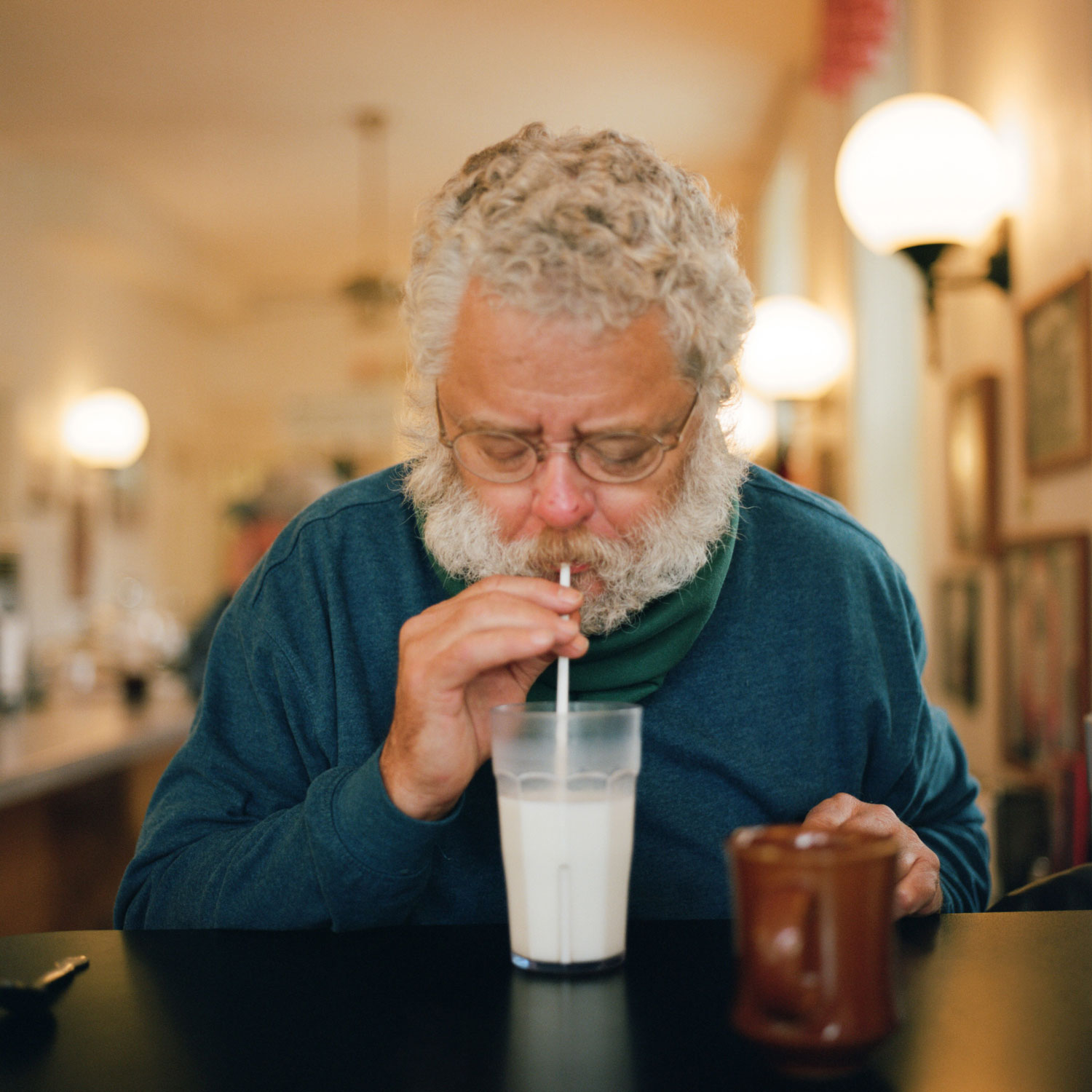 A year after my dad died, I took off on my bike. I left with no expectations other than to ride all day, eat when I was hungry, and roll out my sleeping bag when I was tired. I wandered with purpose. I rode the Blue Ridge Parkway to Grandfather Mountain, Santa Fe to Colorado, Durango to Uray. I rode through Yellowstone and Yosemite, down the coast of California and into the Deep South. All the while I wondered which roads my dad would have taken, where he would have slept and what he would have been doing. At night I smoked a pipe and looked at the stars.

Along the way I met many Americans, young and old, who wanted to do what I was doing. They talked about their dreams of hitting the open road, escaping their realities and welcoming the unfamiliar. For my own part, however, I wasn’t escaping reality – I was immersing myself in it. I was doing what I hadn’t allowed myself to do for an entire year. I was grieving for my father. This goes out to you, Dad. In the words of Arlo Guthrie: “I don’t want a pickle, I just want to ride my motorsickle.” 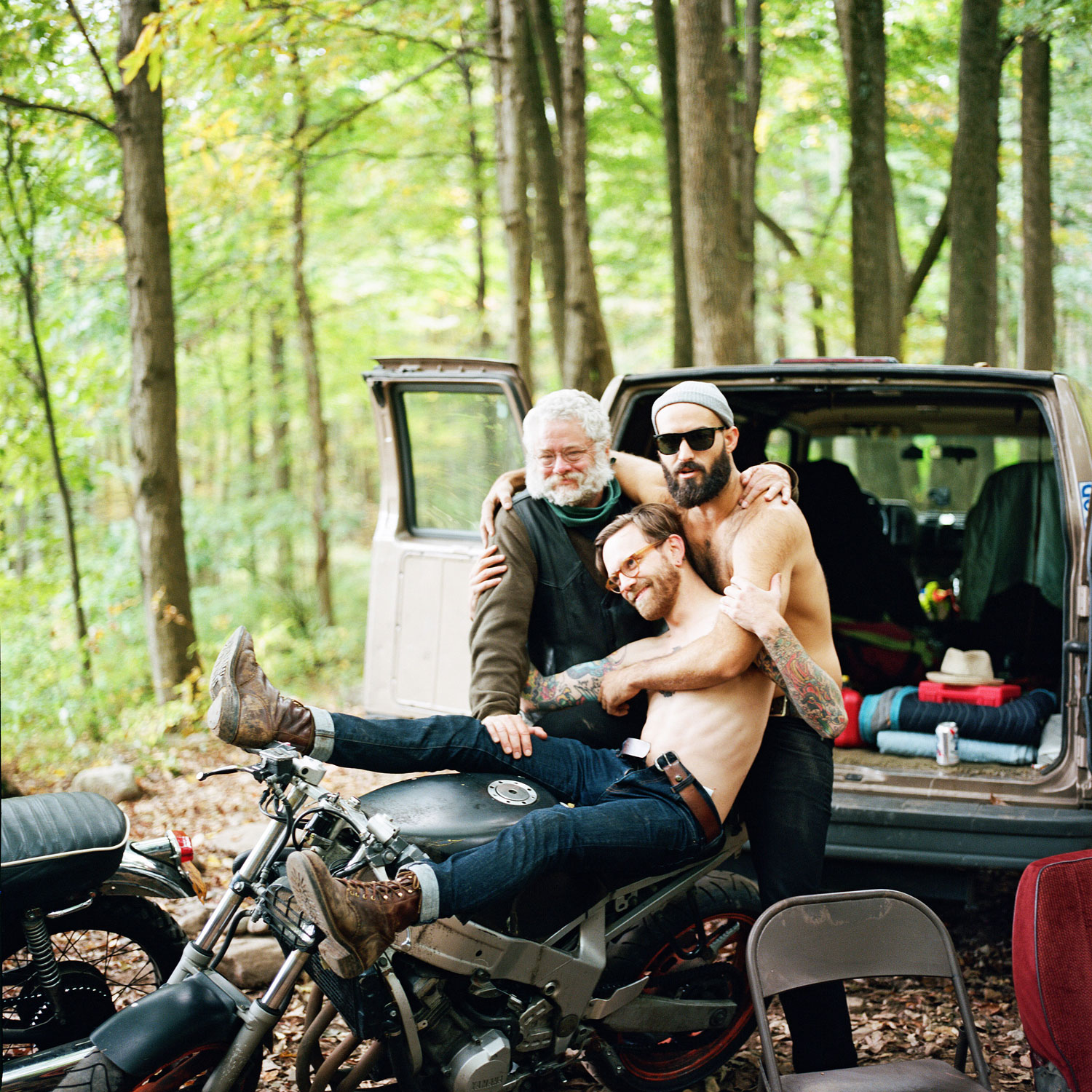 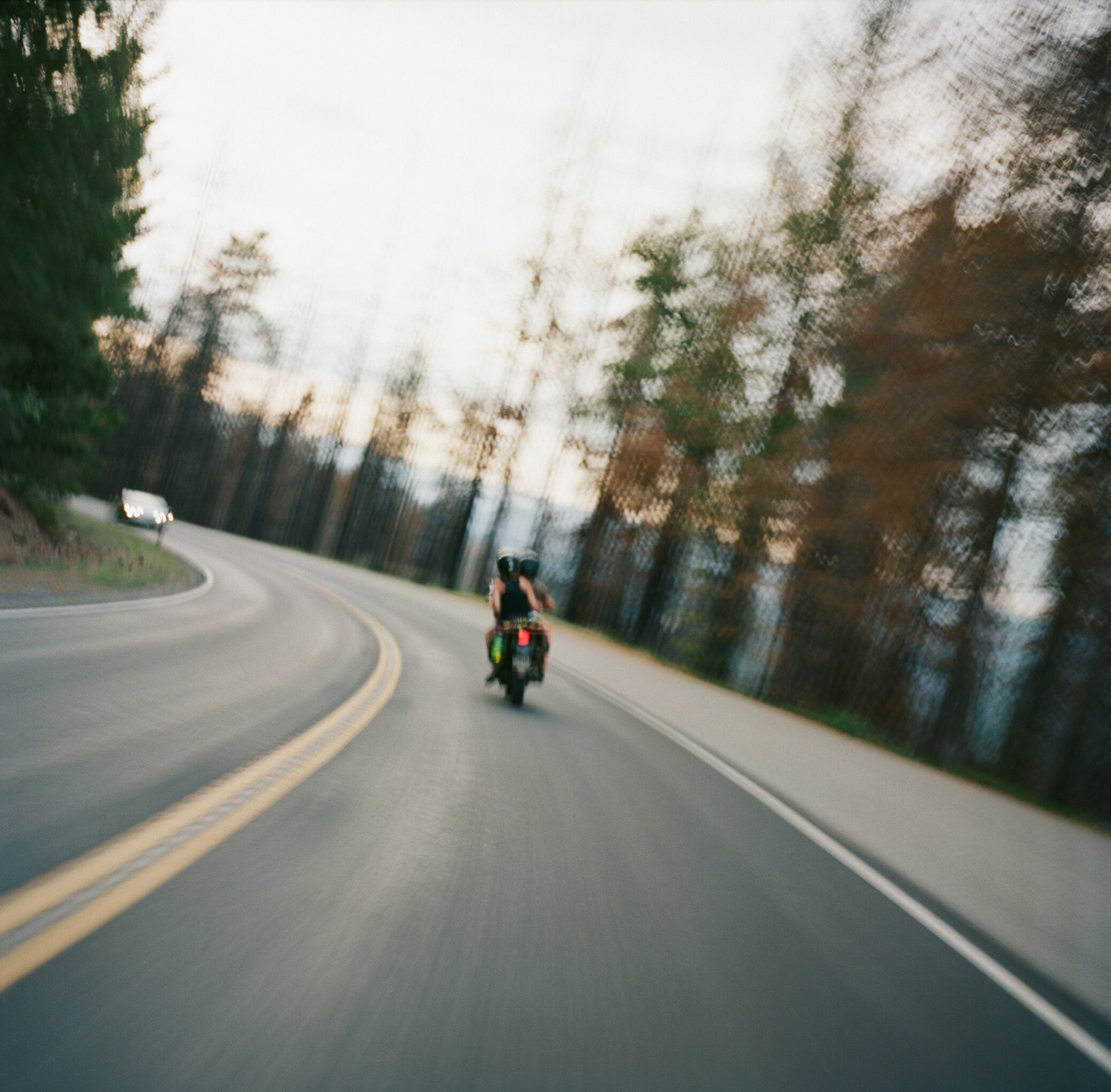 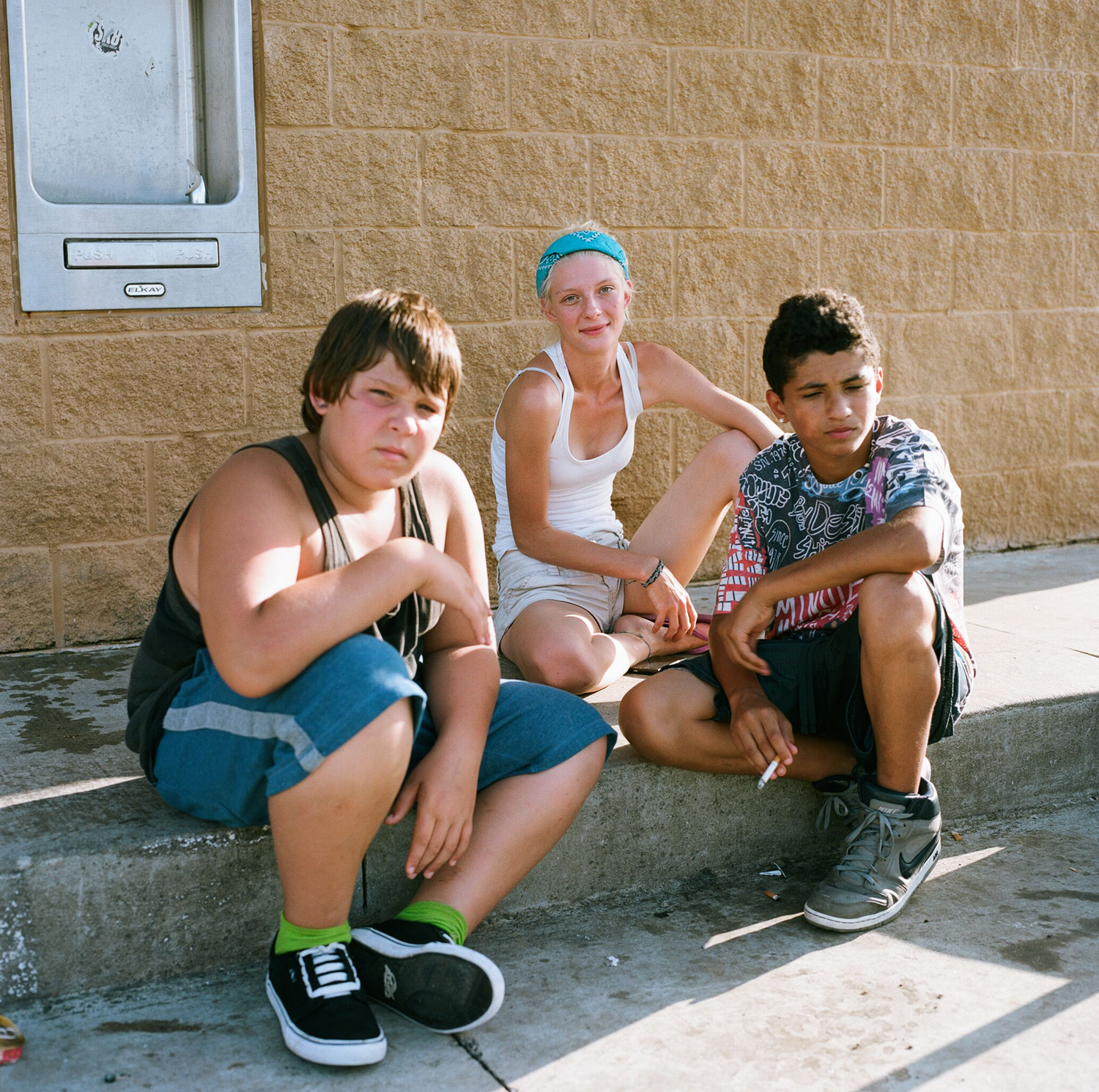 Teenage smokers, skate park north of Tulsa, Oklahoma
When I was a kid, skateparks were few and far between. My mom would drive me hours to a park where skateboarding was sanctioned and the cops couldn’t give me shit for it. Today skateparks exist in all corners of America and are the chosen hangout for local outcasts and skaters alike. They’re a place free of parents where kids are allowed to take risks and learn some independence. I met Samuel, Jonathon and Tia smoking cigarettes at a park just north of Tulsa. 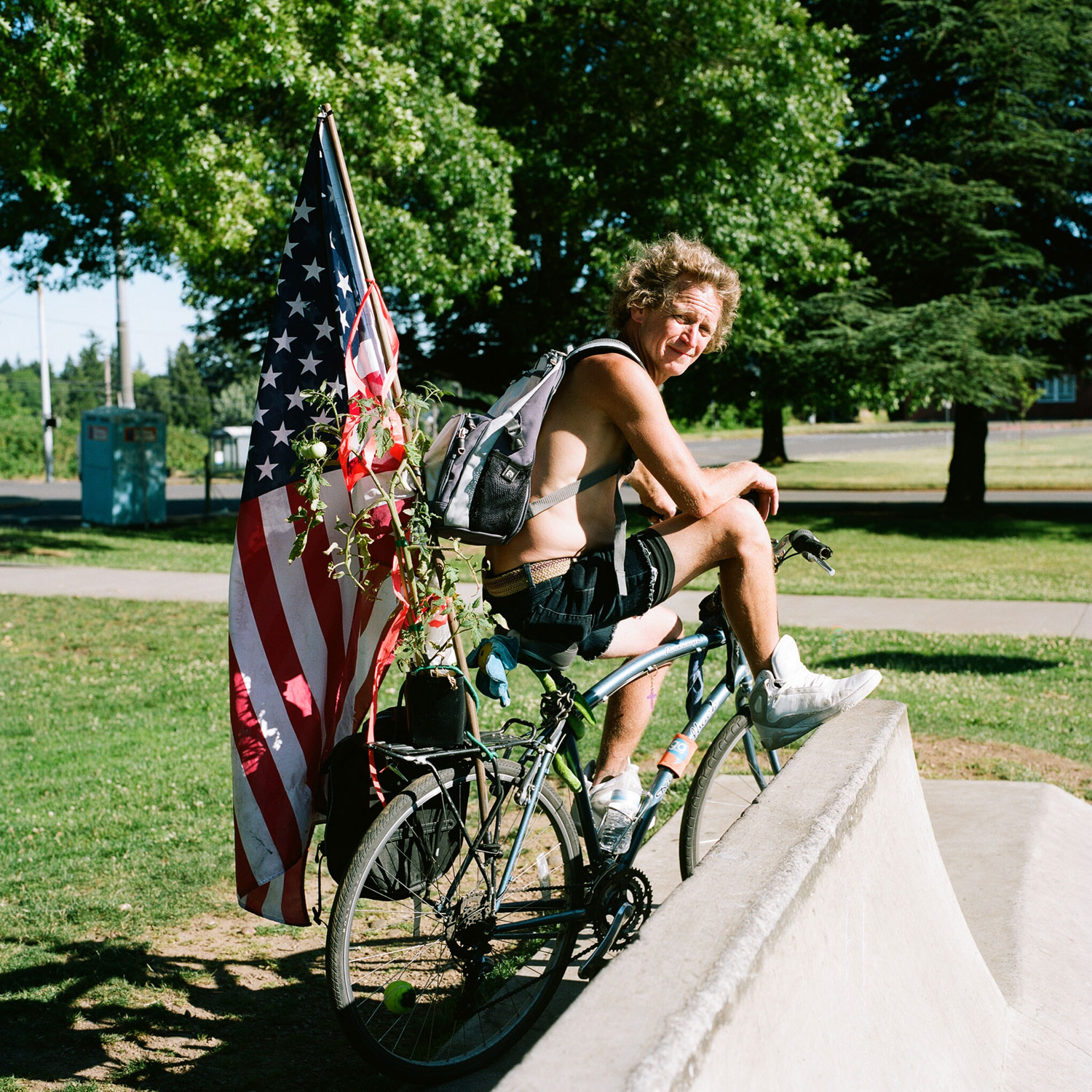 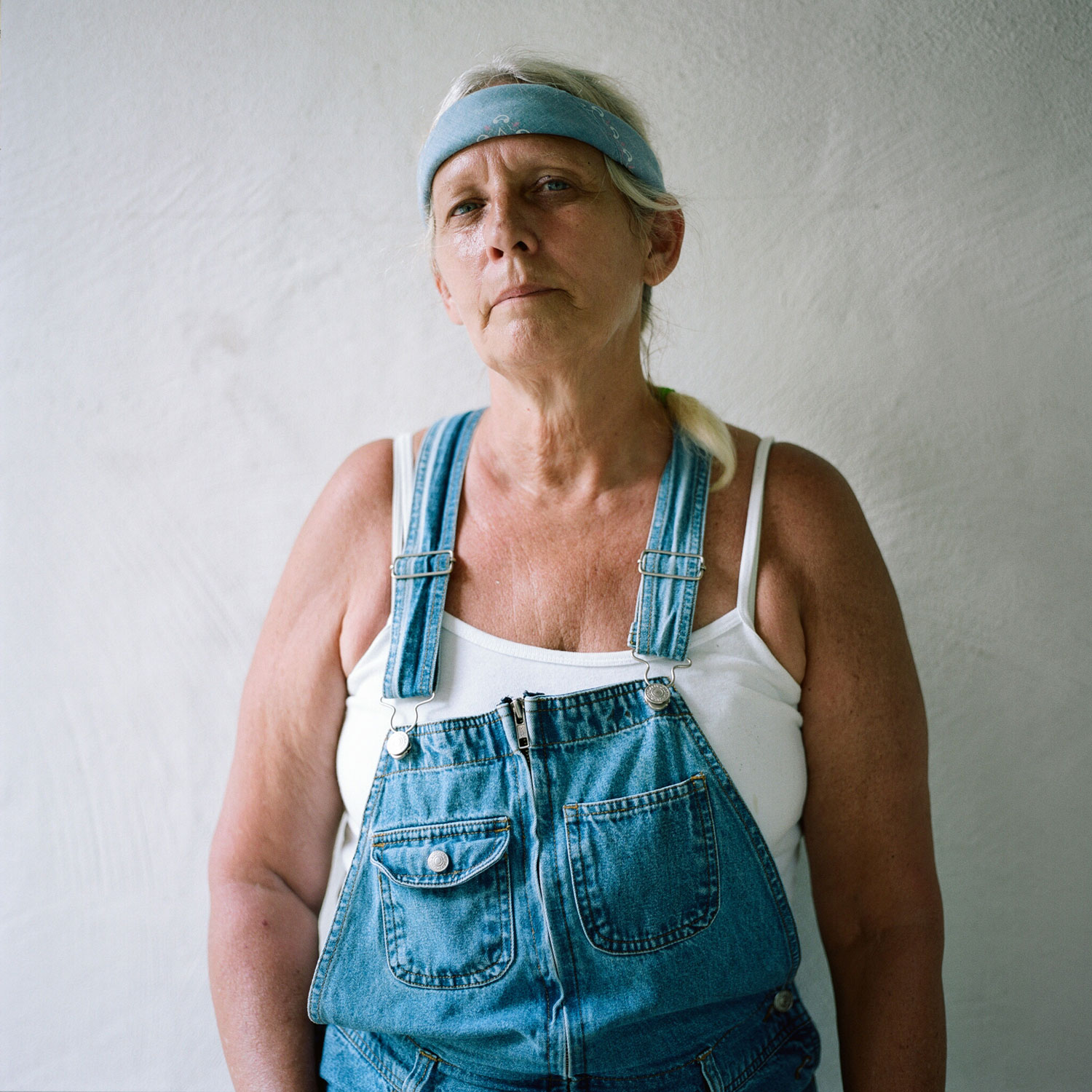 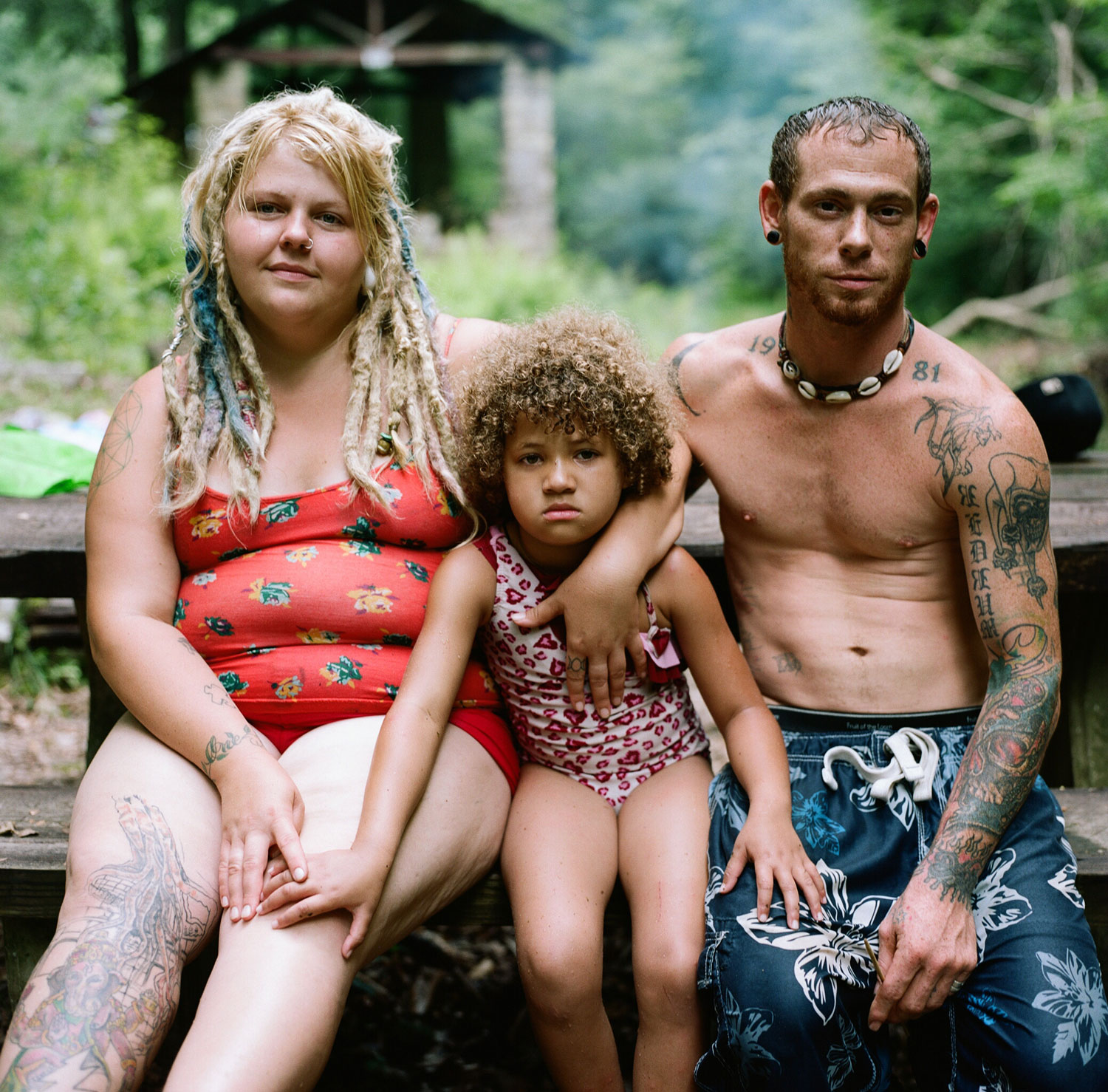 Kayla, Justin and Zoe searching for crystals, Mt. Ida, North Carolina
I met a woman on the side of the road who was selling a huge selection of crystals. I had just passed a sign saying “Welcome to Crystal Springs,” so I figured I better take a look. She showed me crystals of all shapes and sizes and told me about their healing energy. Her name was Julie and she had moved to Crystal Springs to be close to the rocks.

Julie told me that I should check out a natural spring some miles away down a dirt road. I rode for 45 minutes, dodging craters and tree branches, until I reached the spring, which was a spout coming out of a makeshift lean-to structure. While there, I met this young couple and their daughter searching for crystals and takings dips in the water. 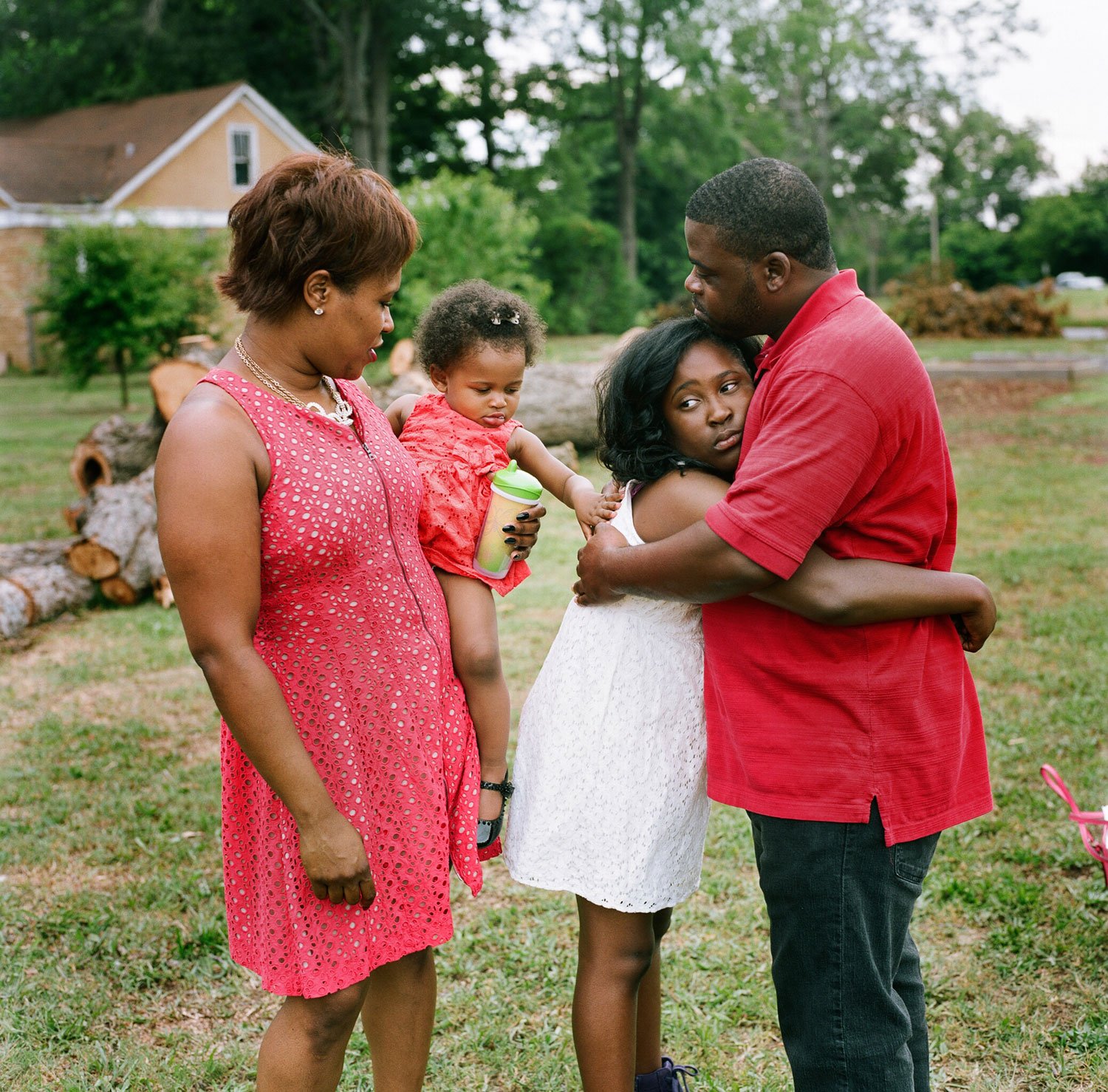 Funeral, Little Rock, Arkansas
I met this family outside a church where a funeral was taking place. I was riding by when I saw the dad standing in a field next to the church, holding the hand of his youngest daughter. I made a U-turn and rode right up to him and said hello. It turned out he was a trucker, so we discussed popular routes and some of our favourite roads. His wife and daughter came out as we were chatting and before I knew it I was taking portraits of a grieving family. 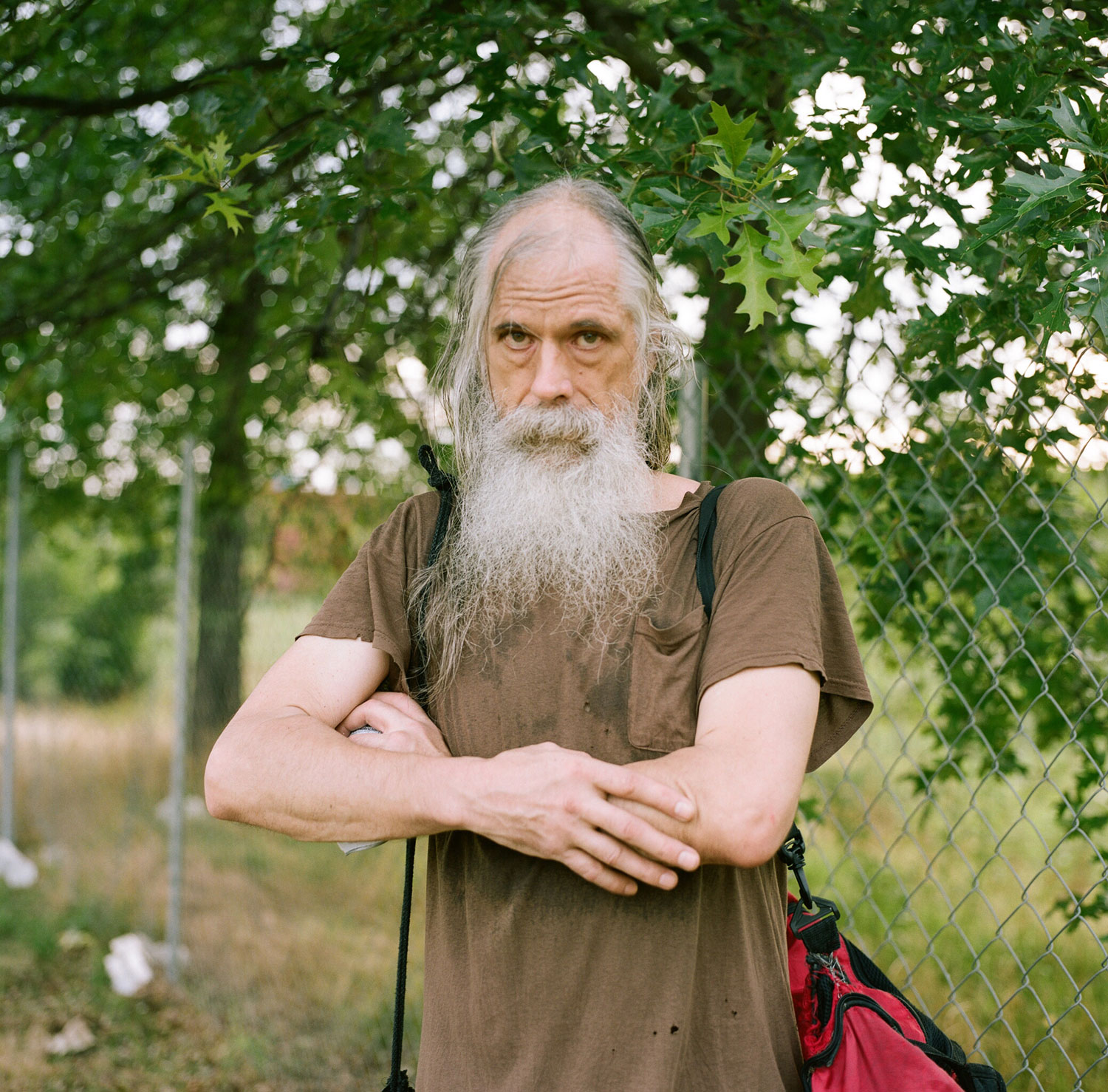 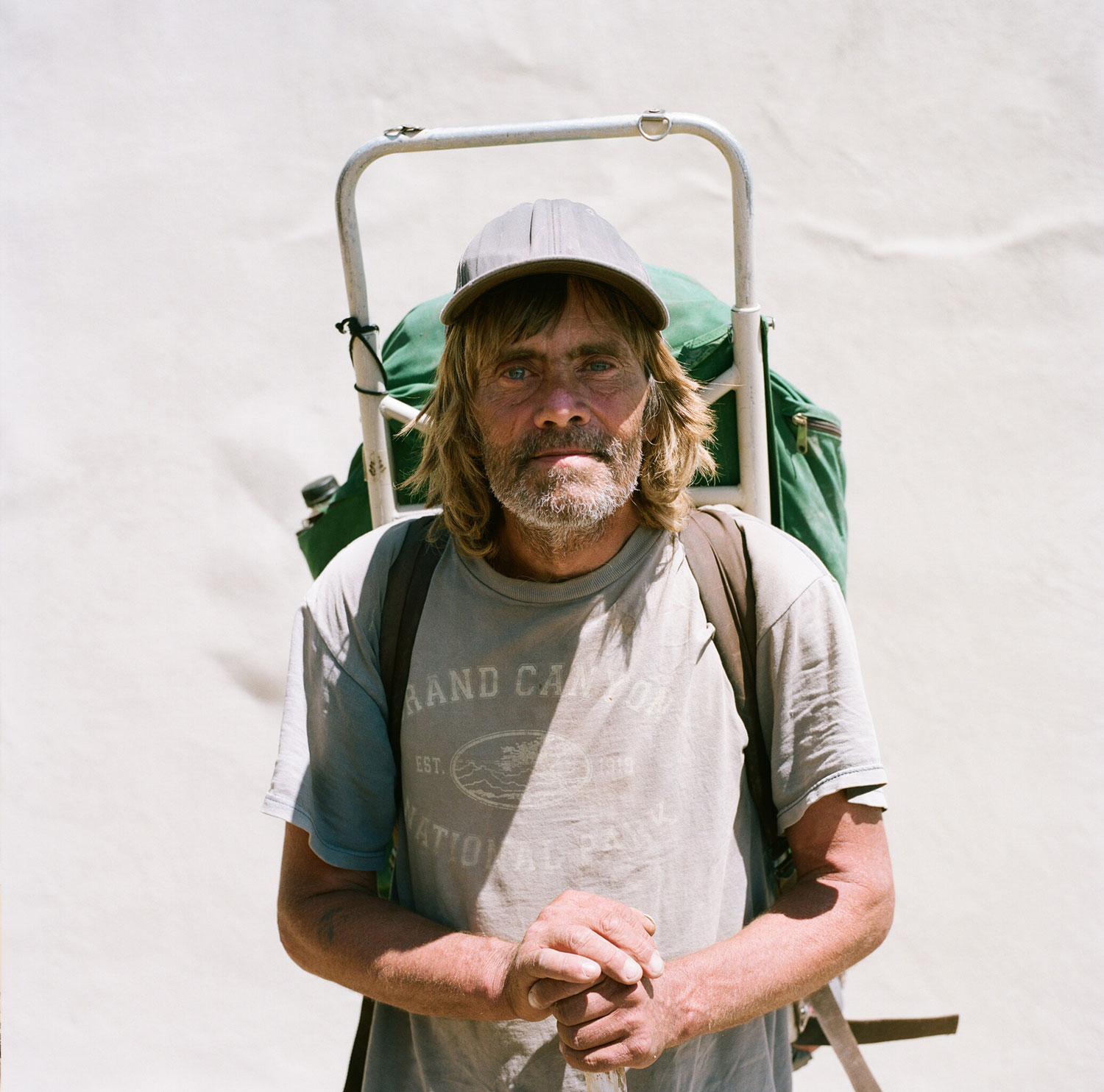 Ricky Shepard hitchhiking home, New Mexico
I met Ricky along Route 66 somewhere south of Santa Fe. Ricky was hitchhiking home to Missouri in the hot desert sun, after trying unsuccessfully to get treatment at a veterans’ hospital in California. 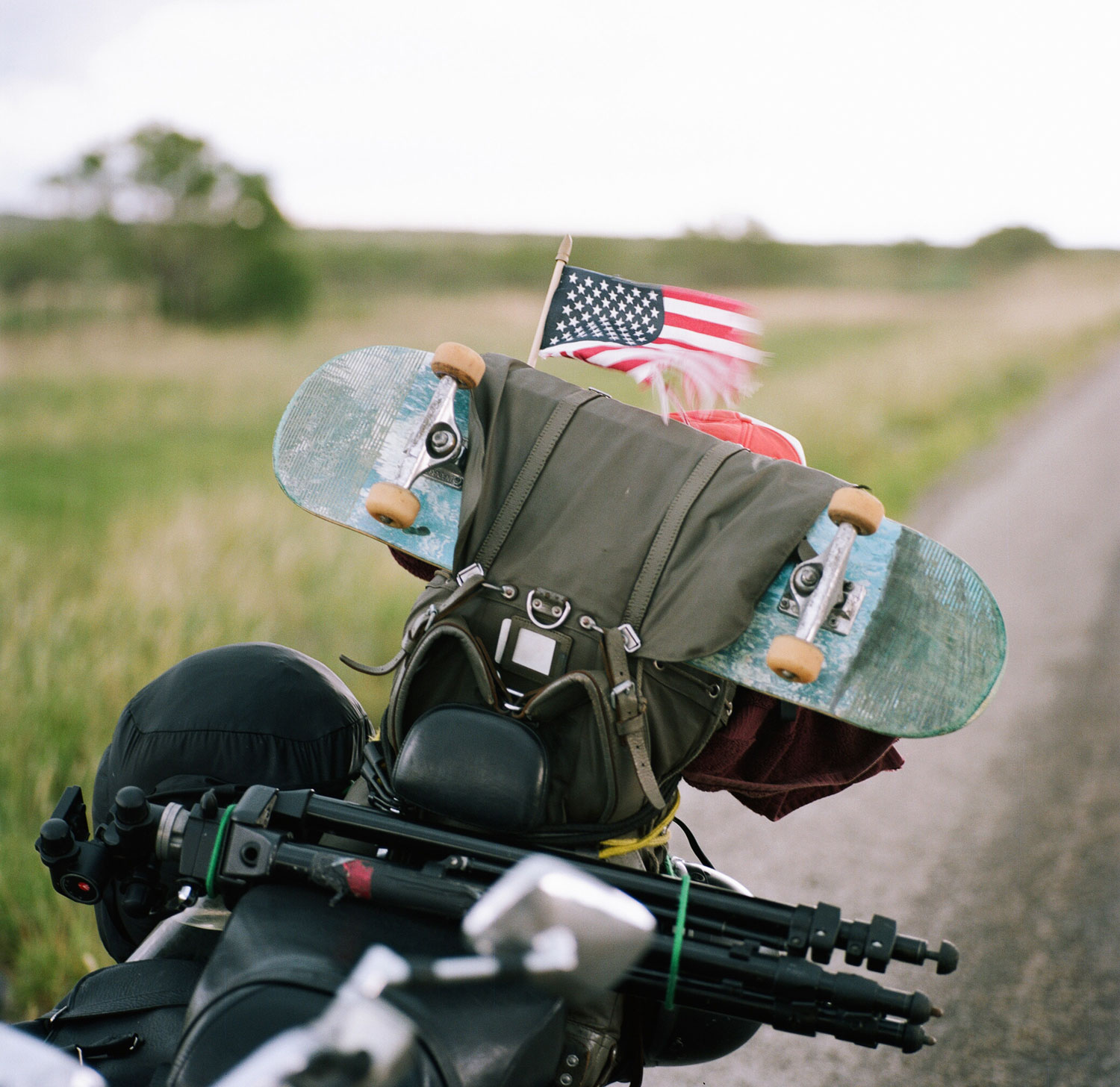 Before the storm, middle of nowhere, Texas 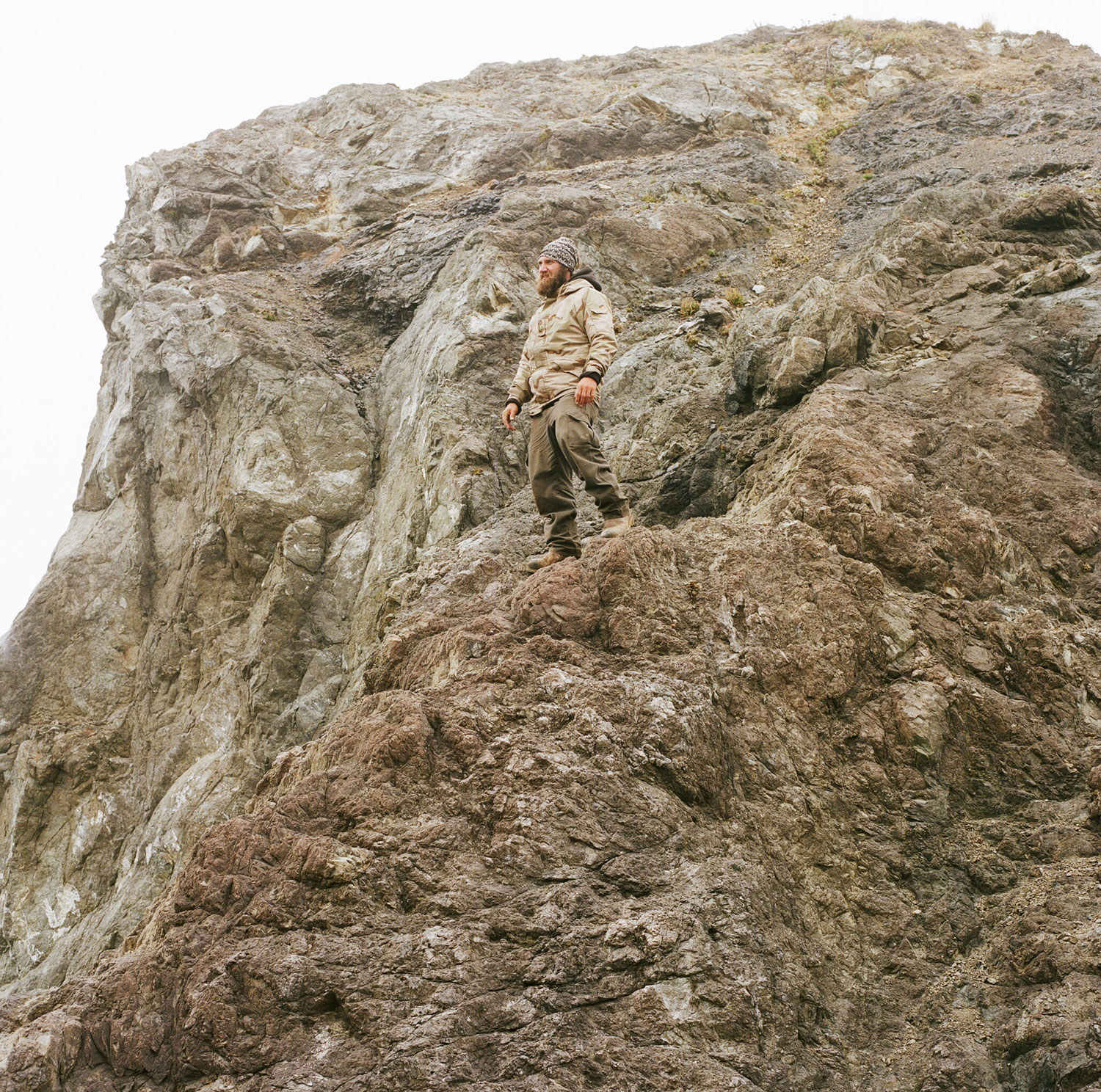 Chase, scrambling up and blending into the rocks, Northern California Coast
I met this badass dude on the coast of Oregon. He pulled up next to me at a red light, made a remark about my skateboard and asked where I was from. I yelled, “Philadelphia,” and he yelled back, “Pittsburgh”. We lived in the same state and yet here we were, 3,000 miles away from home, on the same cross-country road trip. Chase didn’t have a kickstand because it had fallen off somewhere along the way, so I let him lean his bike on mine. 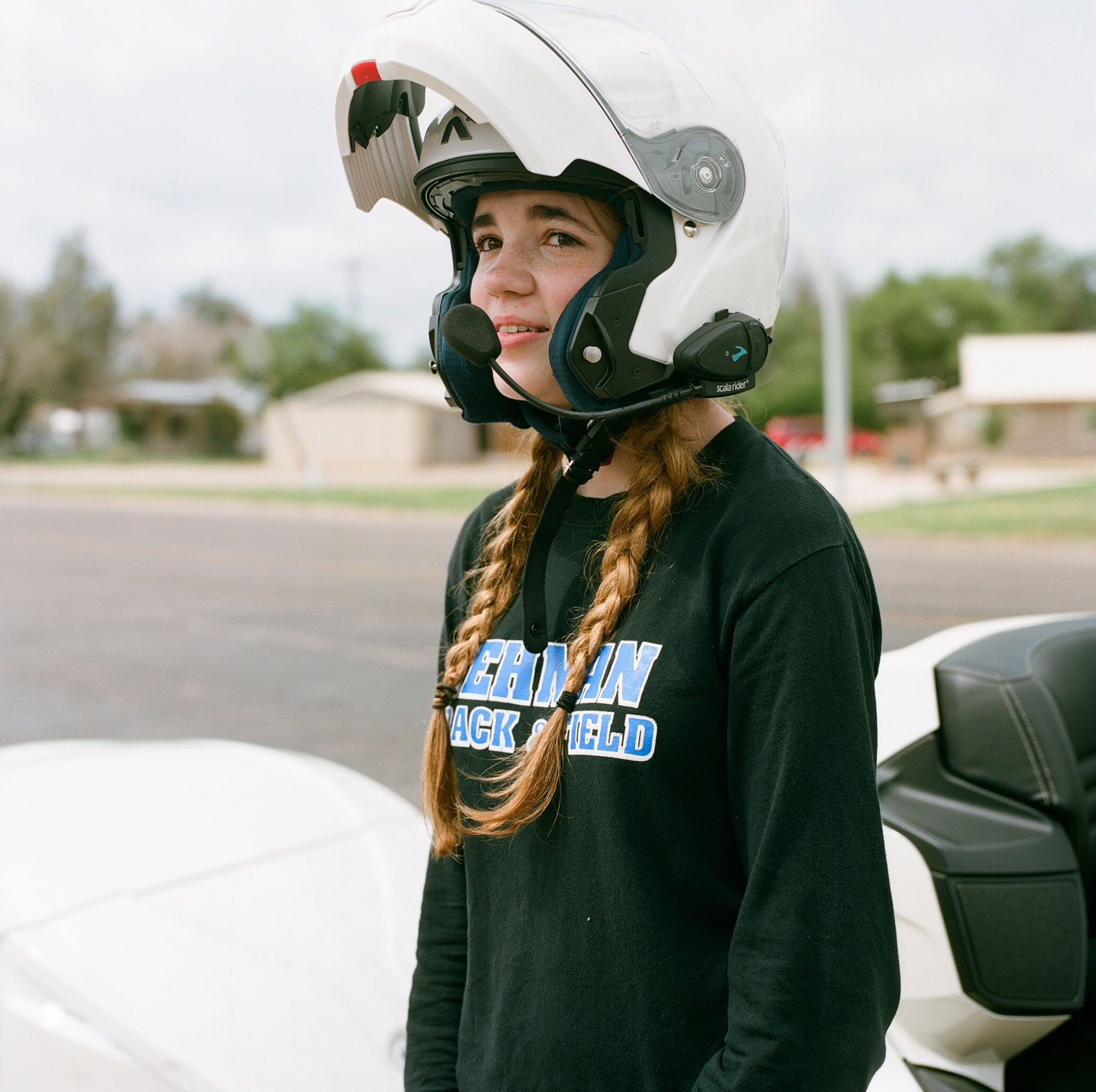 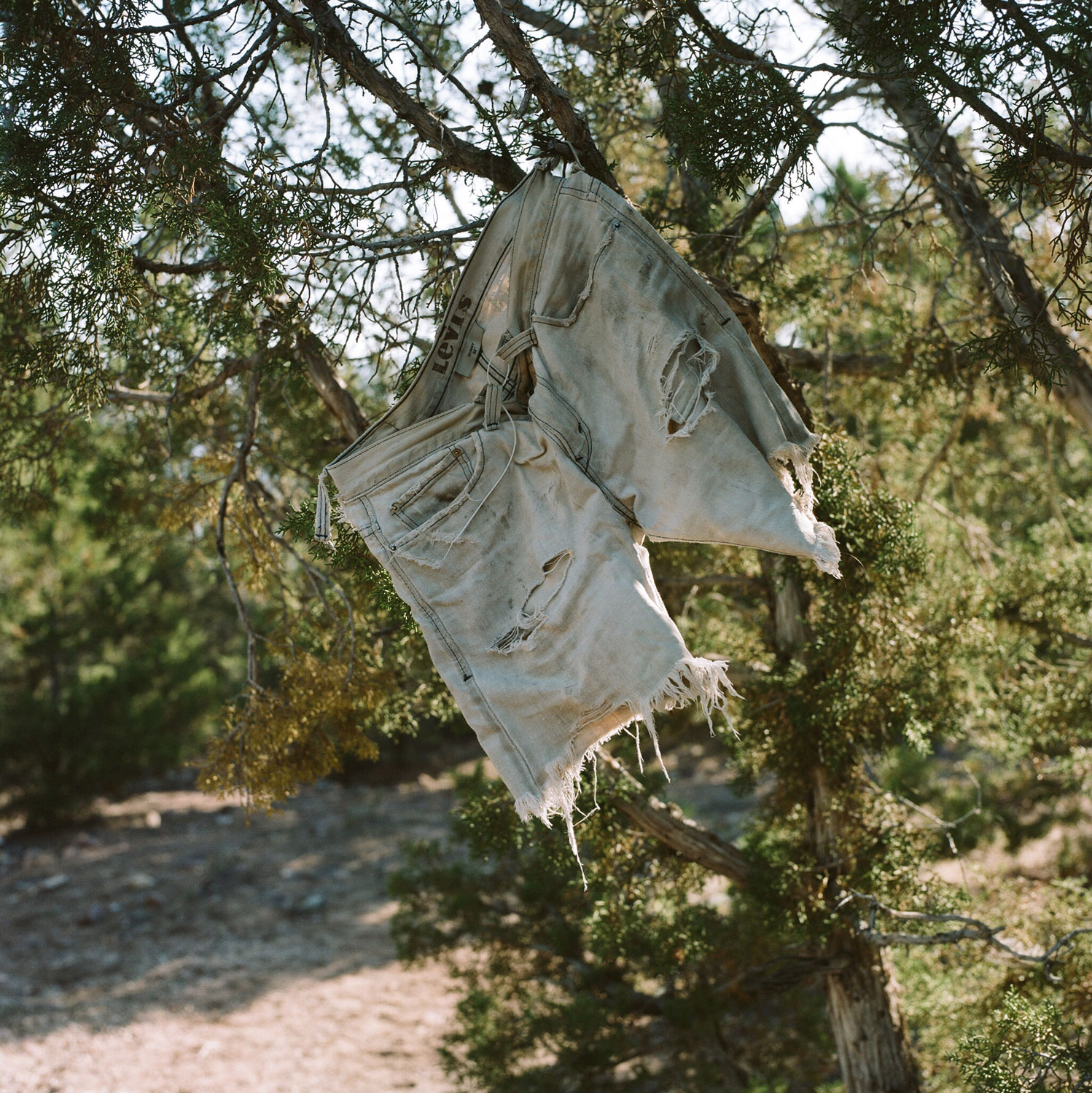 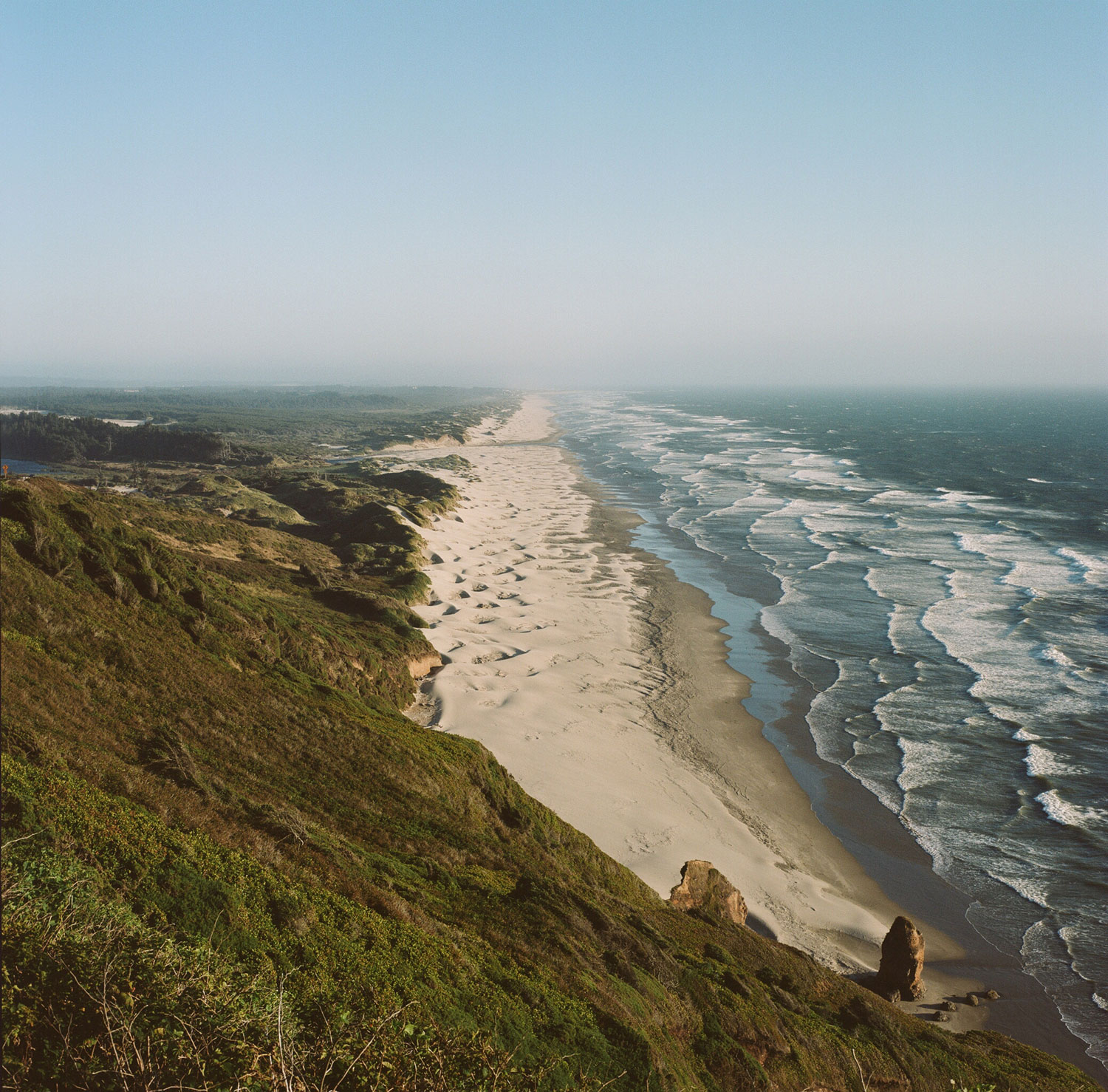 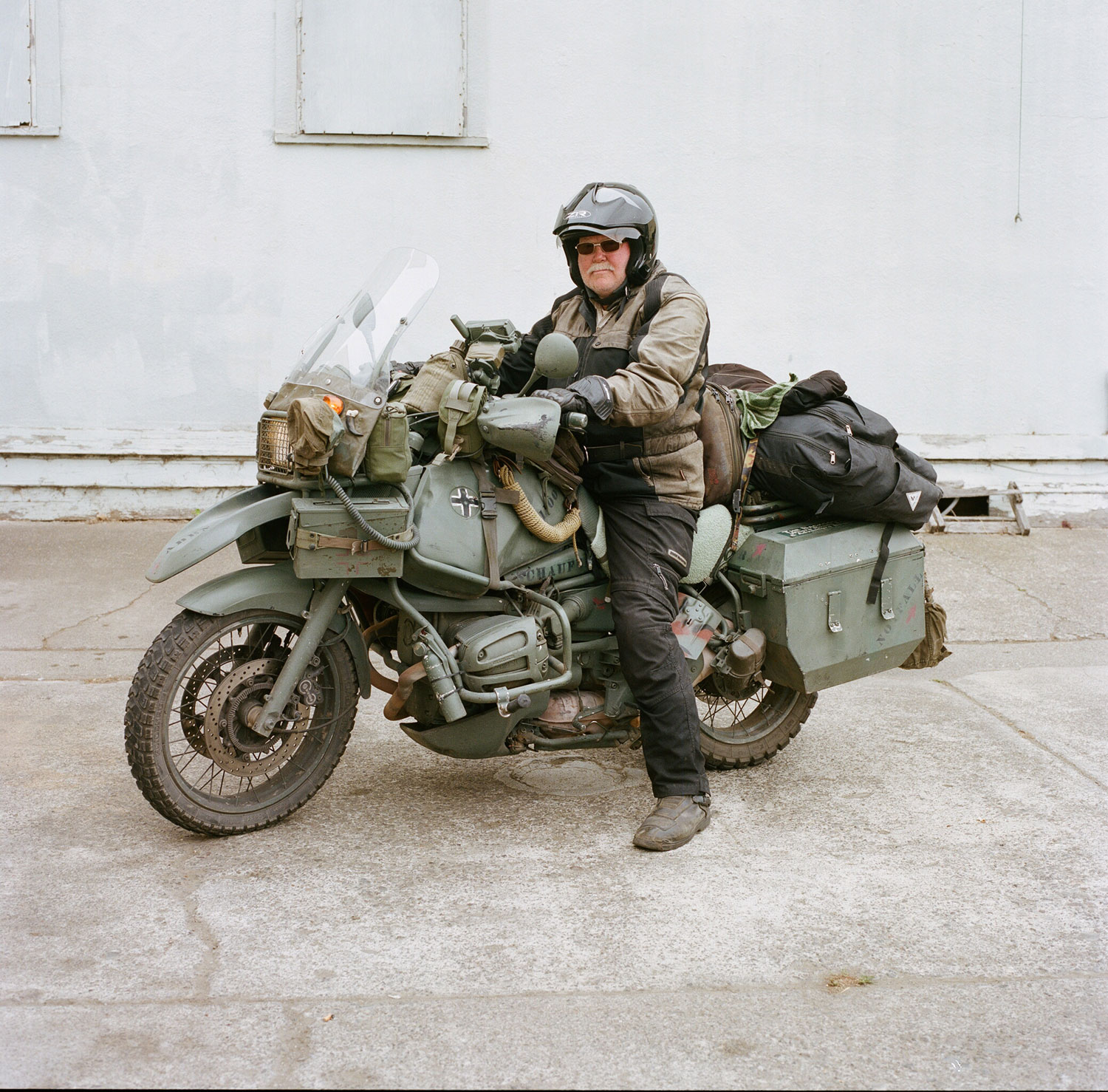 The Lone Wolf (aka The Murderer), Highway 1, California
Chase and I were riding down Route 1 on the coast of California when we spotted a motorcycle shop. The mechanic inside let us change our oil in the alleyway and hooked us up with everything we needed. We’d just about finished up when this dude rolled up on this crazy-looking bike that was tricked out to survive the zombie apocalypse. It was outfitted with hard cases, ammo boxes, a GPS, fire extinguisher, extra gas, rope, multiple knives and a flare gun. The rider was from Nevada, so no wonder. We rode together for a little while until the Wolf convinced Chase to set up camp with him at a remote cliffside spot he knew, while I rode on to San Francisco.

I met up with Chase a few days later in Yosemite, and he told me what had happened after I left them. They were sitting by the campfire at night drinking brandy when the Lone Wolf started showing Chase some Taekwondo moves. It was at this moment that the Wolf told Chase he had spent a decade in the slammer for killing two guys in a bar fight. It was self-defense, he claimed. “Good night,” said the Wolf to Chase, as the sun went down. “Would you like me to bring some brandy into your tent?” 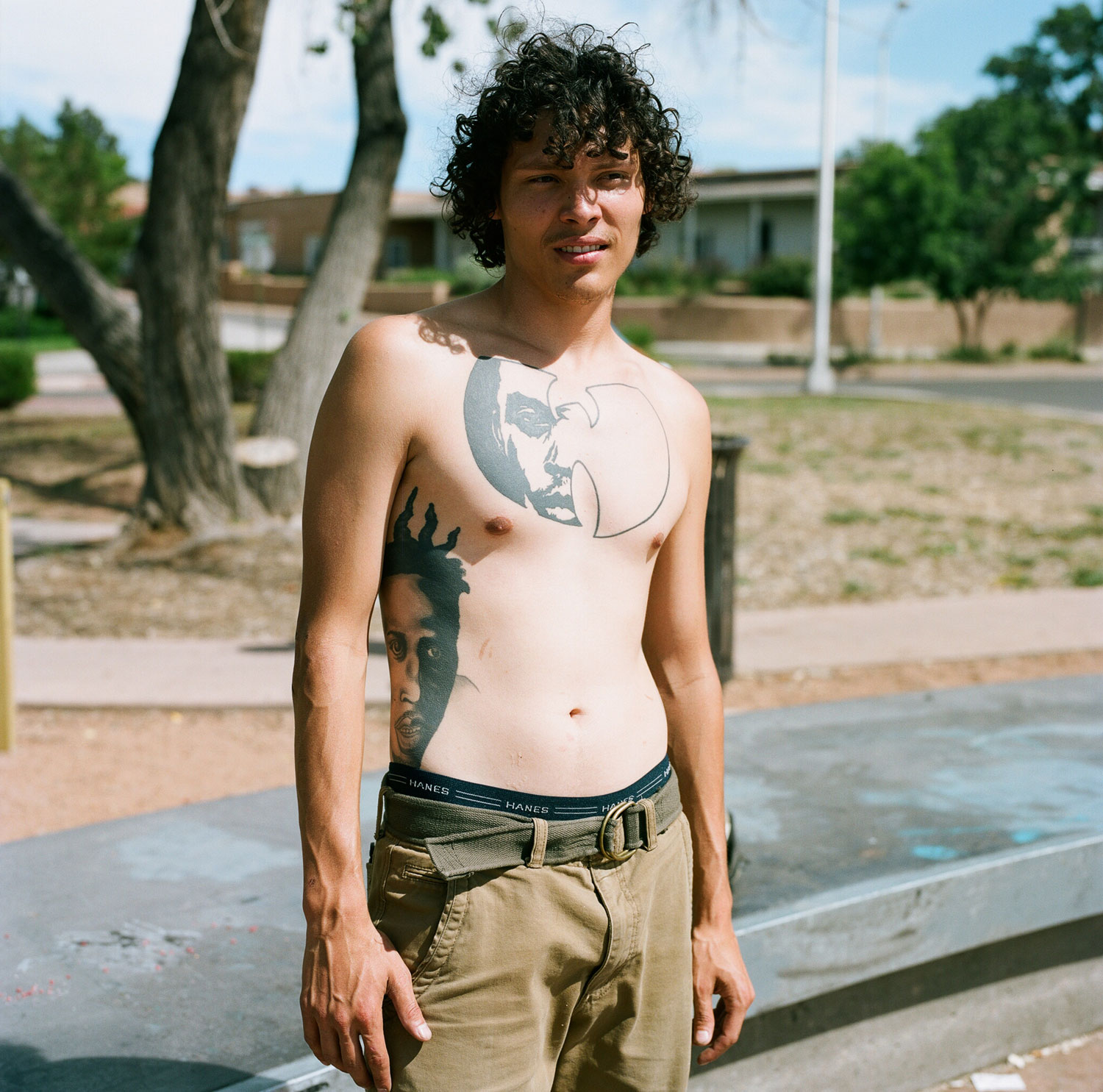 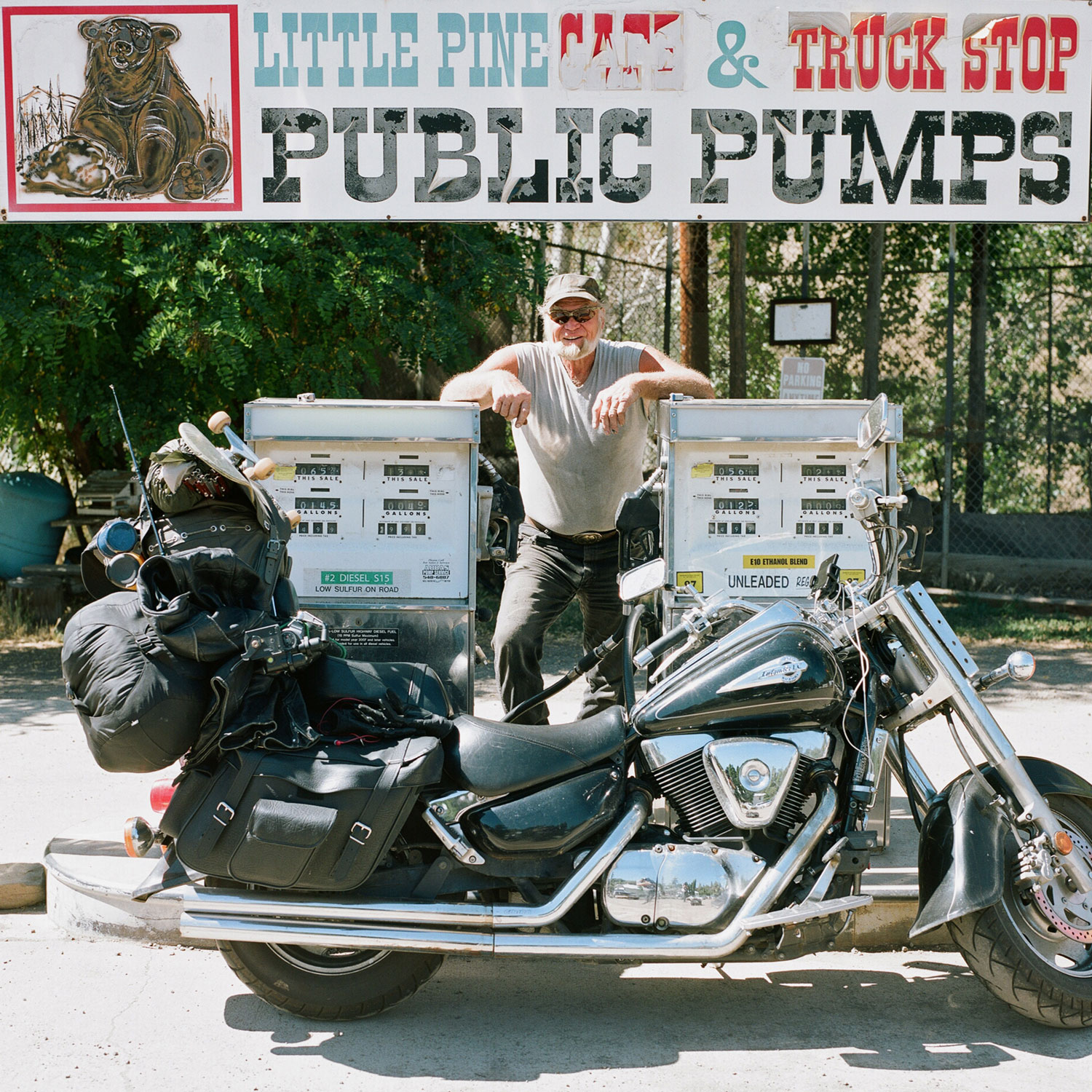 Hugh, Mitchell, Oregon
In southeastern Oregon I pulled into a gas station in a tiny town called Mitchell. This big burley guy greeted me at the pump and all I could think about was how I had to take a photo of him exactly as he was in that moment. I jumped off my bike and asked him not to move as I pulled out my Hasselblad to get the shot. His name was Hugh and he was the owner of the gas station. Hugh also had a pet bear that he used to keep in the cage pictured behind him, but he recently moved the bear back to his ranch where there’s more land to run around. After I was finished pumping my gas, I bought a six pack of Busch and sat in the shade with Hugh, sharing stories. 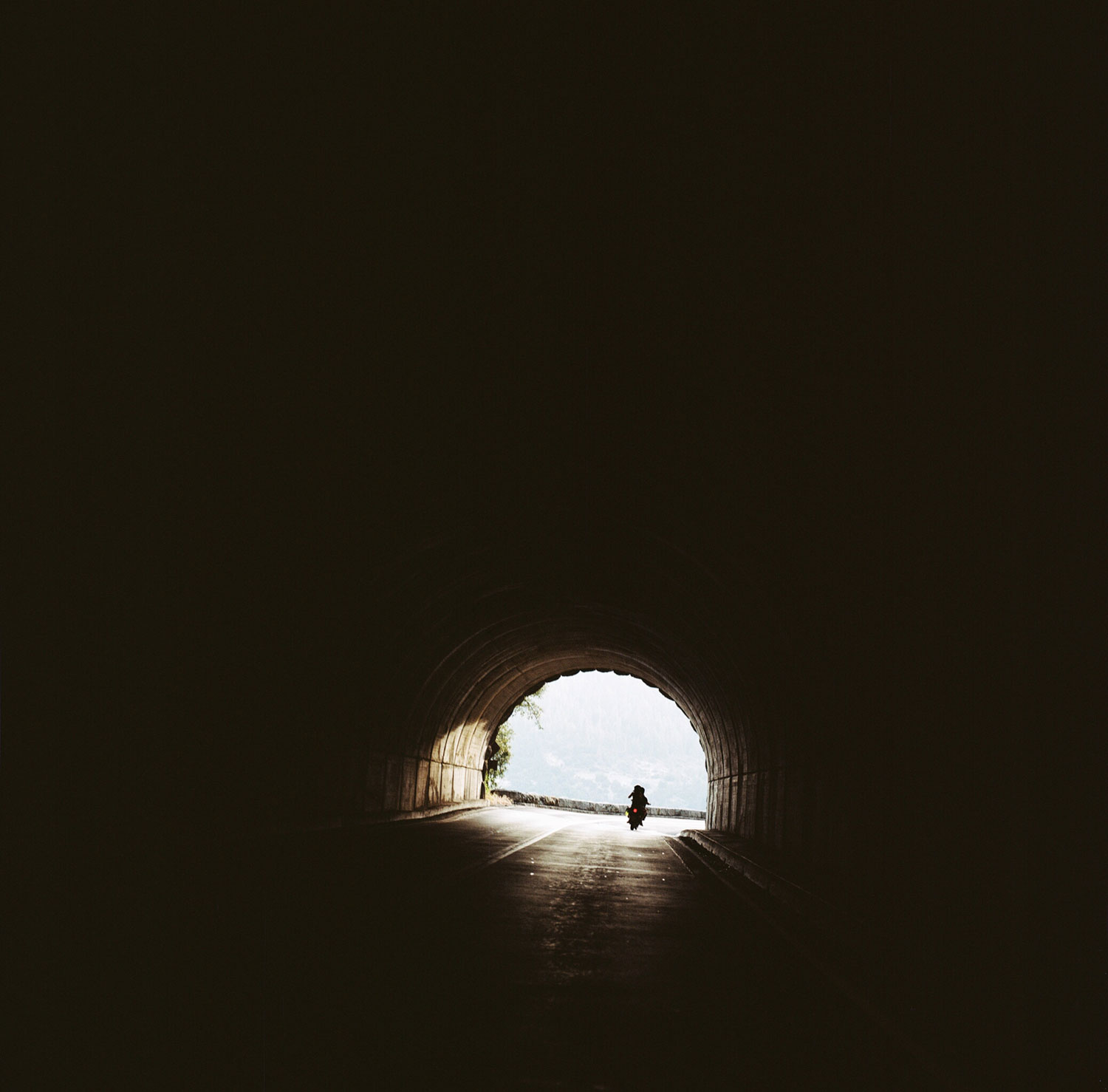 Riding through the mountain, Yosemite 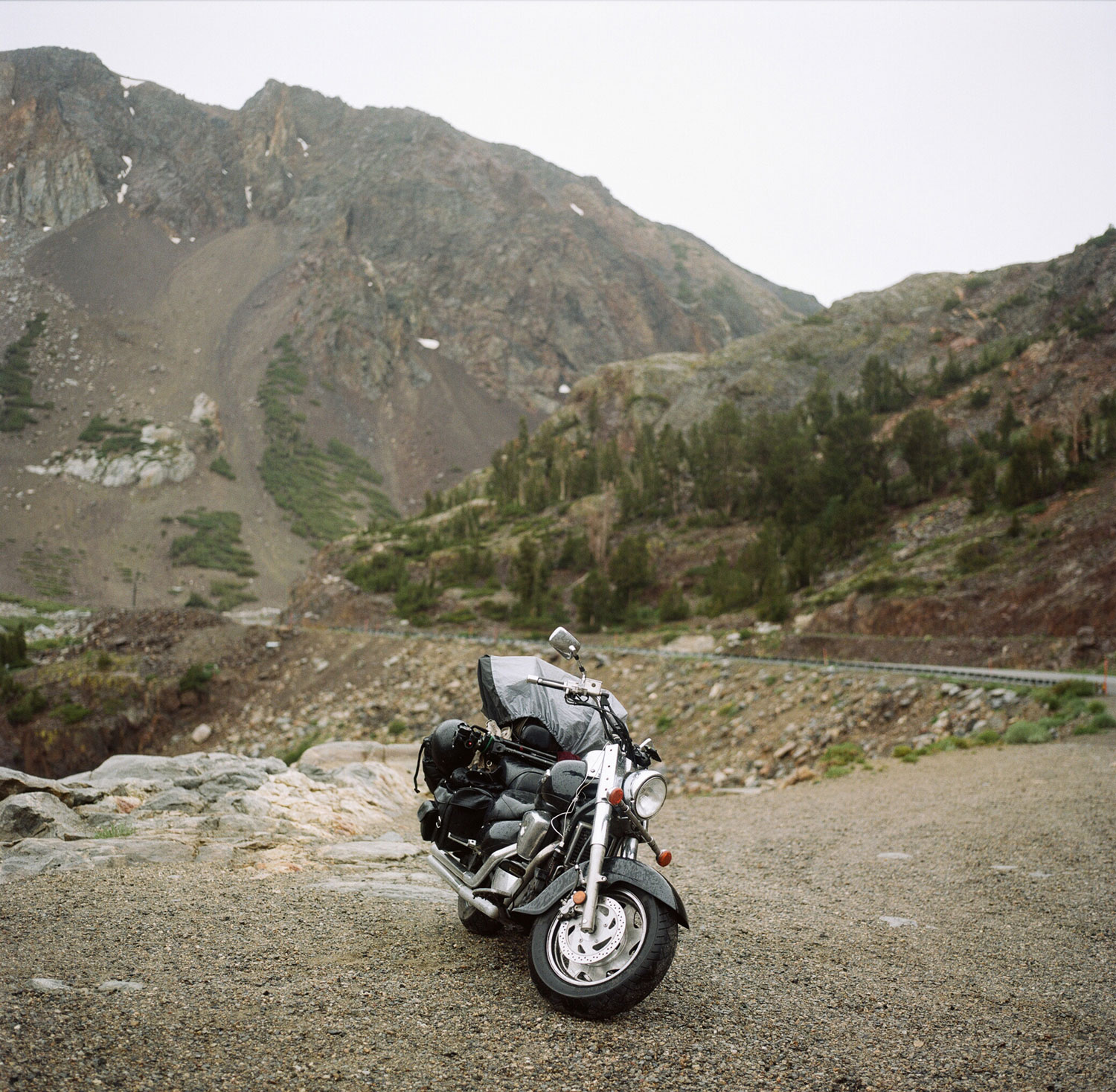 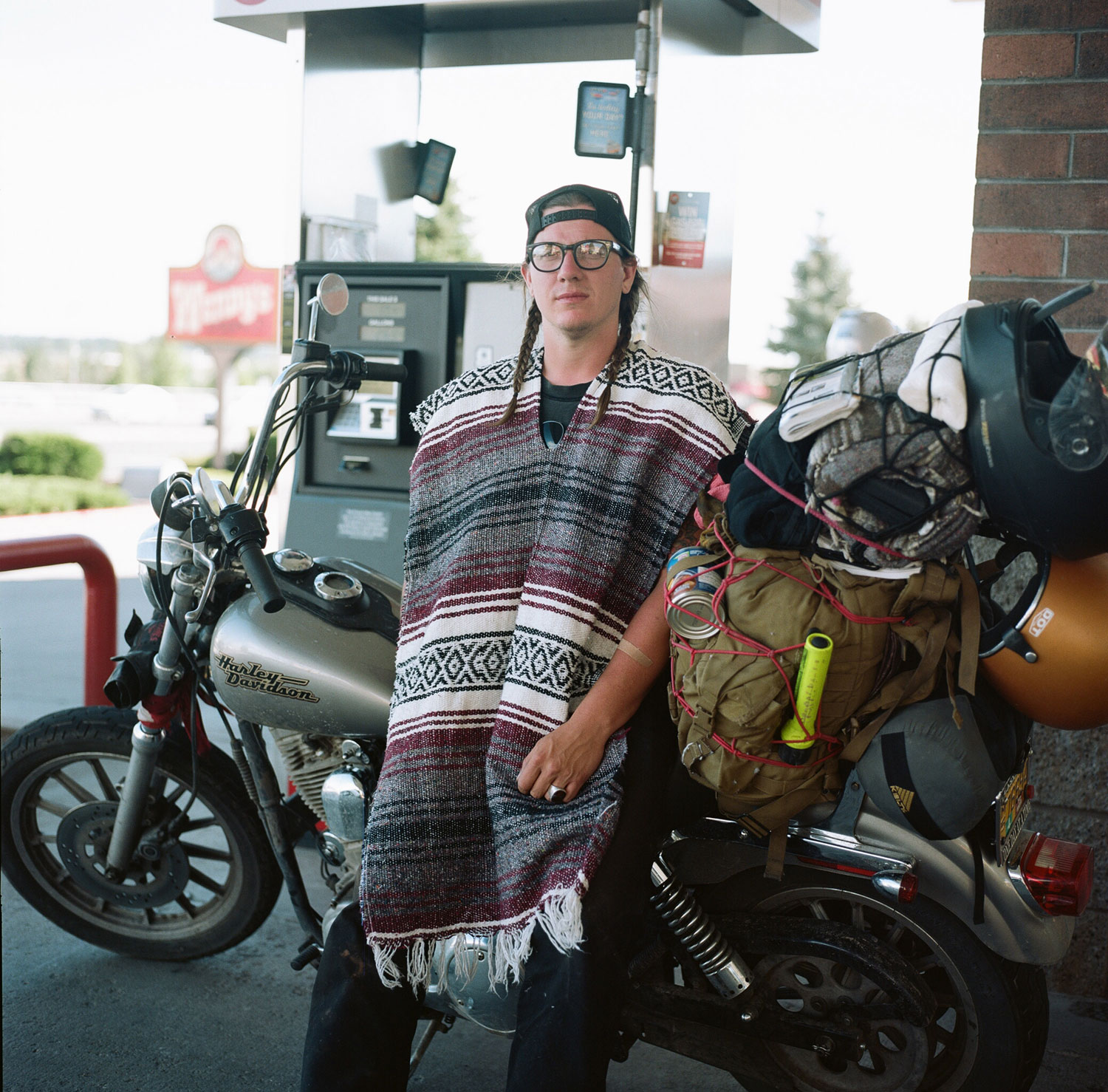 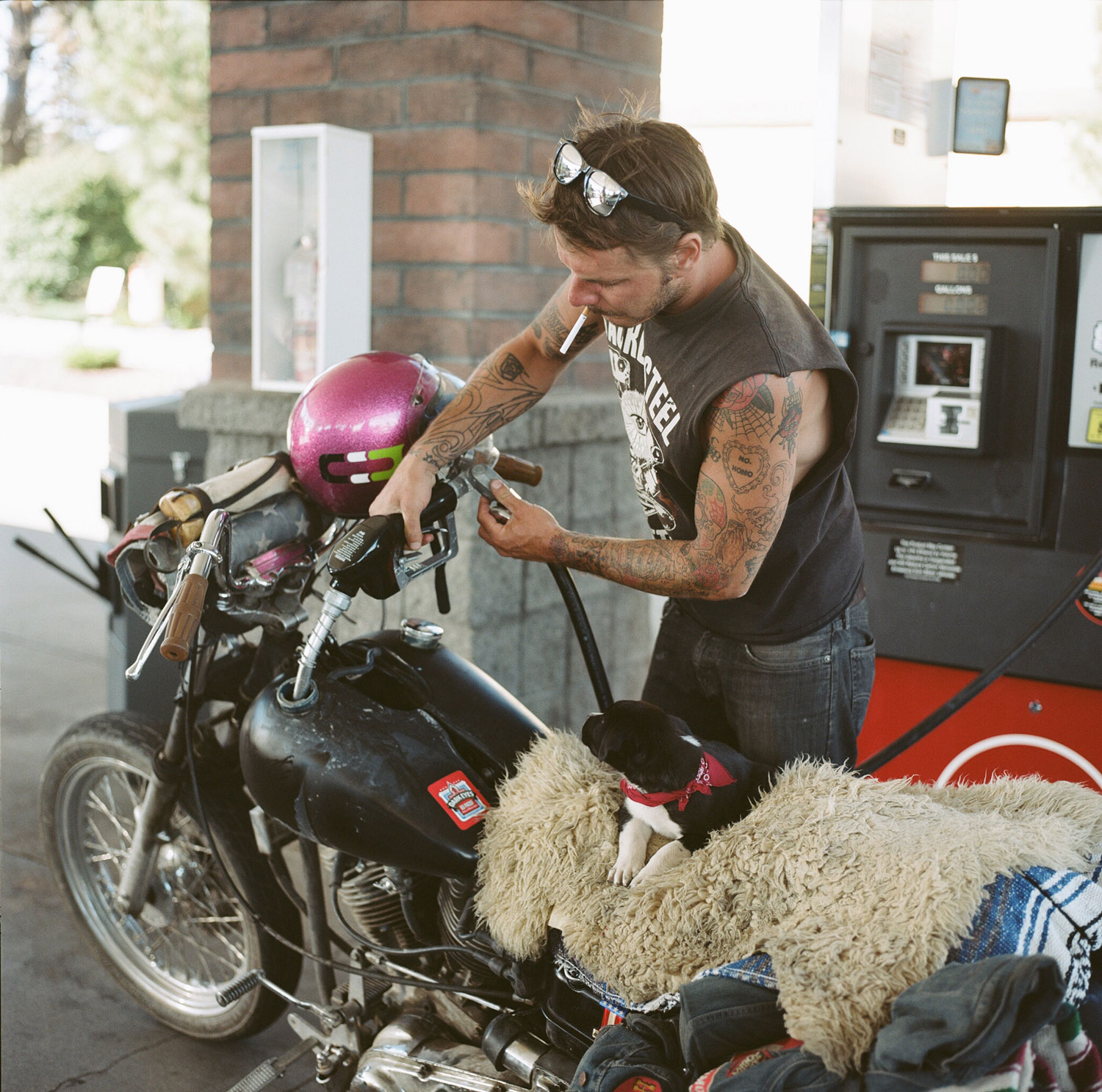 Curtis Motherfucking Jackson and his new pup from Mexico, Flagstaff, Arizona
Just south of the Grand Canyon I met these two righteous dudes on Harleys, filling up their tanks. Andy was cleaning his glasses and Curtis was riding with his girlfriend on the back, a puppy wrapped up in her serape. They got the pup in Mexico from a man who had so many he was giving them away. It’s a long ride back to Portland but they were doing it, puppy in tow. 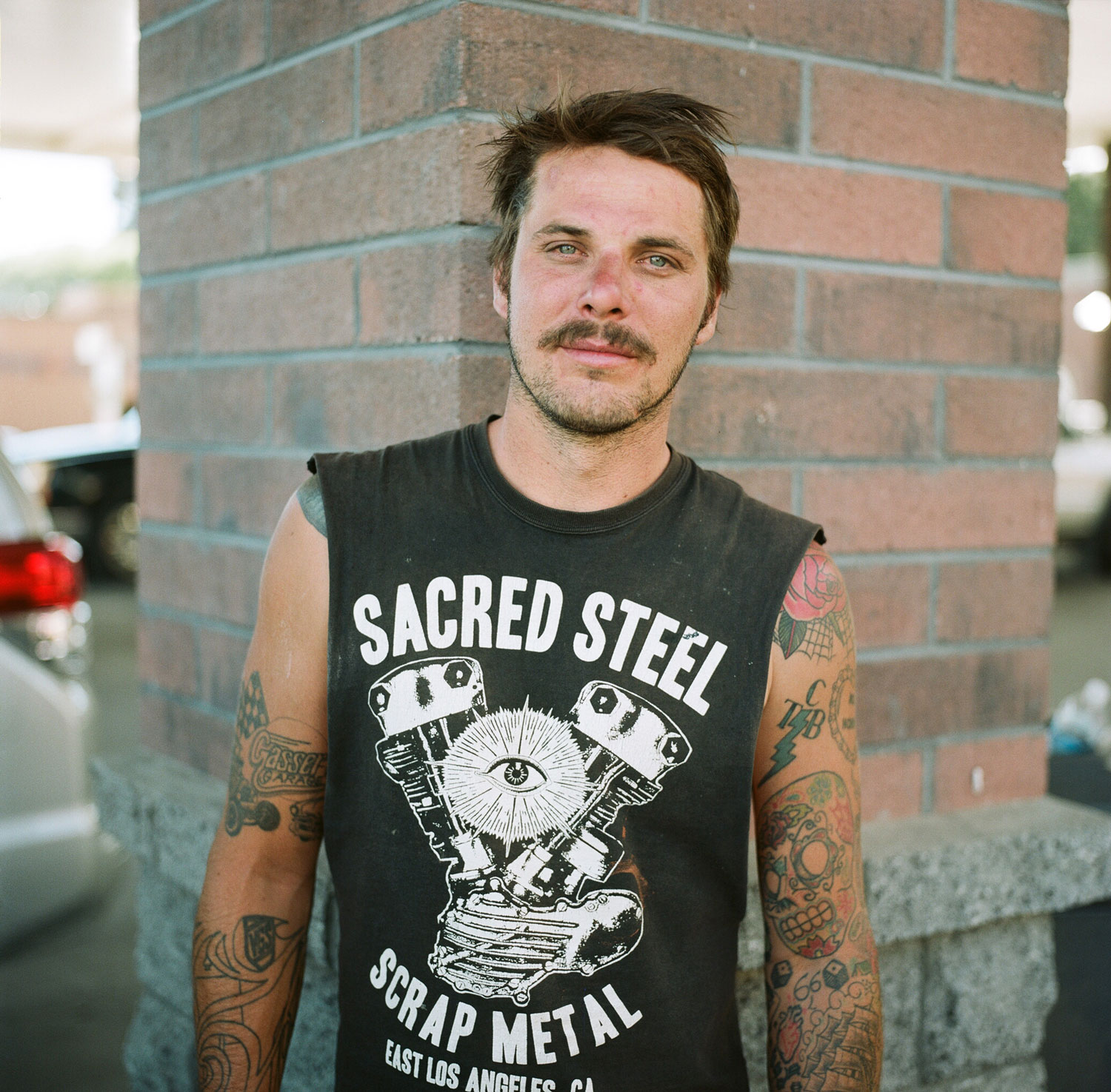 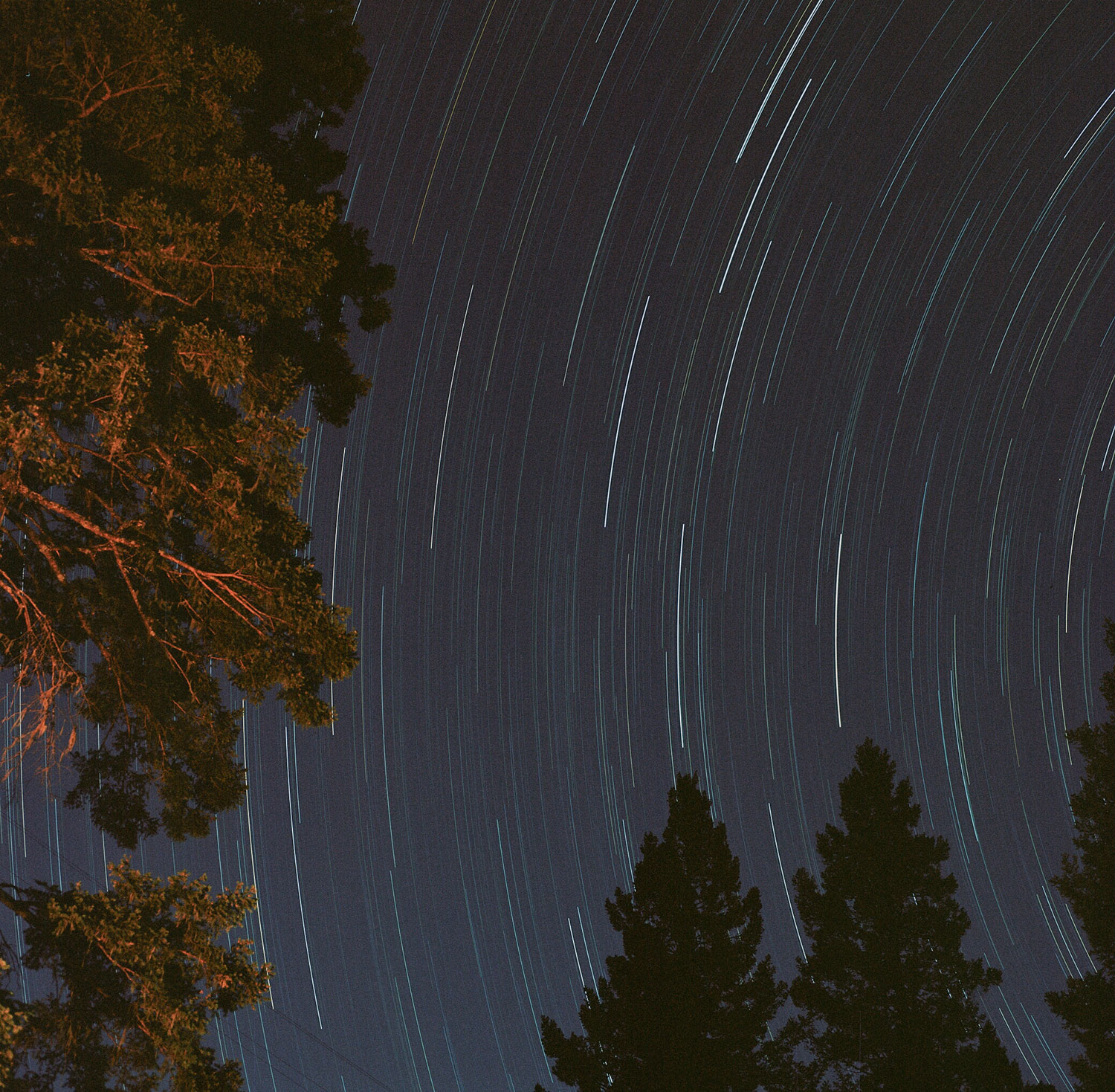